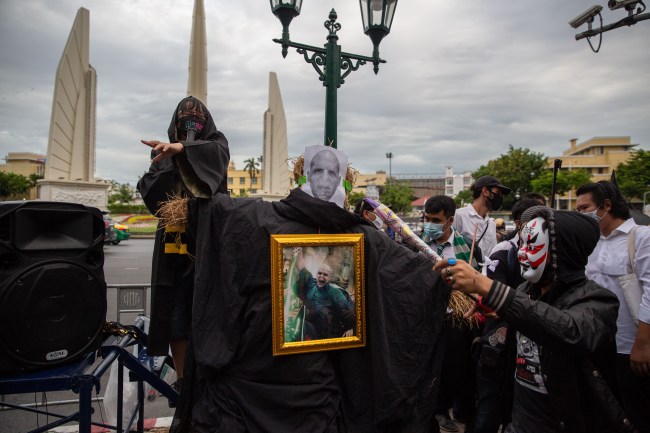 Thailand’s pro-democracy protesters always come up with the most creative ways to protest. Today’s theme: “Casting the Patronas Charm to Protect Democracy: Protect Democracy and Chase You Know Who Out”. #ให้มันจบที่รุ่นเรา #เยาวชนปลดเอก pic.twitter.com/2iSz6BaNq9

You know what’s sad? There are no casual Harry Potter fans. At least in America, Harry Potter fandom seems as divided as politics. You either grew up reading the Harry Potter books or you didn’t. You’re either a child of imagination and joy, or you’re a sad, soulless realist. You either grin and remember how you’d devour 750 pages of the newest book in two days, skipping meals like a high school wrestler, or you cite some baseless, self-determined policy like “I don’t really do magic.” In short, you either grew up happy or you grew up sad and didn’t know it.

Of course I fall in the pro-HP camp. Thus, whenever a good Harry Potter-themed story comes across the interwebs, I sink my hippogriff talons into it. We’ve had a rough run lately with J.K. Rowling throwing curveball batting practice of anti-trans rhetoric, but this morning, good news out of Thailand! Just what Madam Pomfrey ordered.

An anti-government protest decided to throw on their gold-and-red scarves (Gryffindor… original) to speak out against the monarchy. Apparently they rallied against enforced disappearances (soccer teams in caves) and gender equality (no comment from J.K. Rowling), among other issues.

How does the Harry Potter theme pertain to democratic ideals in Thailand, you ask?

Coconuts– “There are murders, forced disappearances, assaults and threats against those who oppose evil power. People are so much in fear they don’t dare to say the devil’s name out loud,” it continued, seeming to refer to Potter’s archnemesis Lord Voldemort, the dark lord called by those who fear him as You-Know-Who. “Now it’s time democracy-loving wizards and muggles unite to protest for their rights, freedom, fraternity and return power to the people’s hands.”

“Bring your magic wands, if you can’t find one, chopsticks work too,” the announcement said.

Well I’ll be doggoned. That’s about as perfect a parallel as one could ask for. The King of Thailand is Voldermort, his minions are the death eaters, and the people have had enough. Time to rise up as one and take back Thailand. No worries if you can’t hit Ollivanders in Diagon Alley on the way; just bring a chopstick and we can pretend.

If you can’t smile at a group of anti-government protestors waving single chopsticks and casting patronus charms to oust the king, you’re dead inside.

The organisers are now taking turn giving speeches, which touch on enforced disappearances, gender equality, and abolition of the senate, as well as repeating the three demands made by Free Youth Movement at the mass protest on 18 July. pic.twitter.com/zUQwK8L6GH

Apparently the three-finger salute has been adopted for this movement as well. You know, the salute from The Hunger Games? Katniss Everdeen and her child-murdering gladiator pals? Talk about blending universes. Don’t invite me to a Marvel party and expect me to flash some DC salute. Let’s keep our young adult universes separate. Nobody is going to take us seriously.