‘The Haunting of Hill House’ Is So Scary It’s Causing Viewers To Have Anxiety Attacks, Lose Sleep And ‘Terror Vomit’ 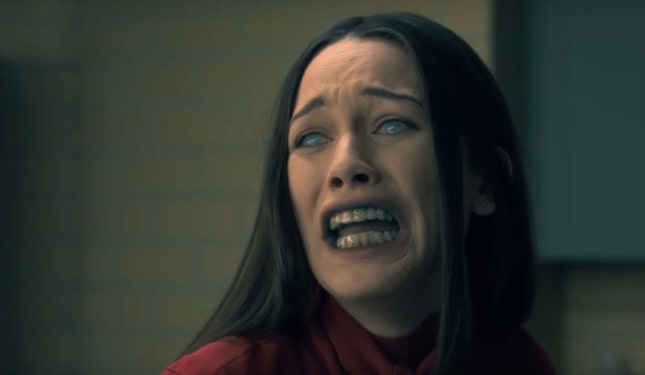 Critics and audience agree that the new Netflix horror series The Haunting of Hill House as it has received outstanding reviews on Rotten Tomatoes. But not everyone is enjoying the hit horror TV show. Some viewers are apparently having anxiety attacks, losing sleep, and even puking because they are so scared. So they say.

The Haunting of Hill House, which is based on Shirley Jackson’s 1959 iconic novel of the same name and was adapted into the 1963 movie titled The Haunting, is so hair-raising that people are having a visceral reaction. Viewers of the Netflix thriller are tweeting out that they have suffered sleep deprivation, debilitating anxiety, and “terror vomit” because of the ghastly terror featured in the show.

i've been watching the haunting of hill house for like 4 hours and now i dont wanna go to sleep pic.twitter.com/37G8R7aFOa

Shoutout to my body, my anxiety, and my recent binging of the haunting of hill house for waking me up at exactly 3AM last night 👌 👌 👌

The Haunting of Hill House has me fucked up on multiple levels. Like. My anxiety has been progressively peaking since I started watching this show. That's fuckin impressive.

This is officially the best horror series I've seen so far!

I started The Haunting of Hill House last night & it gave me goosebumps and heavy anxiety. 😱

Haunting of hill house is making me terror vomit in joyful confusion. So I love it.

I saw Terror Vomit open for As I Lay Dying at the Vans Warped Tour back in 2008.

Other The Haunting of Hill House fans are noting that it is a great show that is creepy, but not puke-your-brains-out petrifying.

Haunting of Hill House. It's good, but has yet to scare me, let alone make me vomit. #horrorfan

So if you’re expecting to terror vomit, you might be disappointed. One person who was not disappointed with The Haunting of Hill House is Stephen King, who said, “I don’t usually care for this kind of revisionism, but this is great. Close to a work of genius, really. I think Shirley Jackson would approve, but who knows for sure.”

THE HAUNTING OF HILL HOUSE, revised and remodeled by Mike Flanagan. I don't usually care for this kind of revisionism, but this is great. Close to a work of genius, really. I think Shirley Jackson would approve, but who knows for sure.

The Haunting of Hill House tells the spooky story of siblings of the Crane family, who are dealing with repressed trauma and ghosts of their past from growing up in the spooky Hill House and the haunting that occurred at the creepy mansion. The ten-episode horror series is available right now on Netflix for your bingeing pleasure. Keep a puke bucket close by just in case.