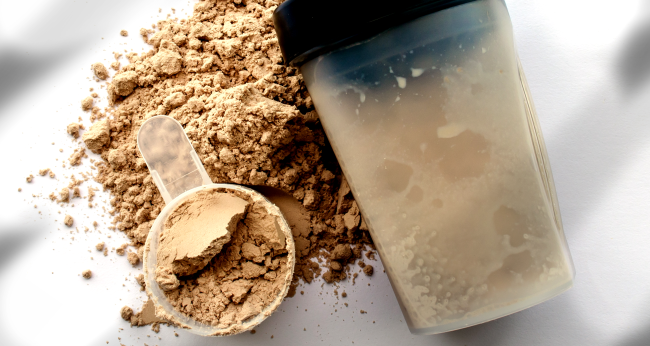 For some reason, there are a lot of TikTok “challenges” out there that tend to put people’s lives in danger. Perhaps equally as surprising when it comes to these TikTok challenges is the fact that there are so many people willing to try them out, despite what would seem to be obvious risks.

Some examples of these disturbing TikTok challenges include putting a penny in a electrical outlet, ingesting a ridiculously large dose of Benadryl, licking a toilet, and the always popular “Skull Breaker Challenge” where the name alone should have been enough to stop people from doing it.

The latest viral TikTok trend to almost kill someone is called “dry scooping.”

Dry scooping is a trend that has recently been popularized on TikTok and involves ingesting an entire spoonful of protein powder with the promise of a more productive workout after taking it.

This was a concept that sounded appealing to 20-year-old OnlyFans creator Briatney Portillo so she tried it, then headed out to the gym.

“After I took the pre-workout, I started to feel tingly and itchy all over my body, which wasn’t a good feeling, but I googled it and it said that was a normal side effect,” she told Buzzfeed.

“So I began to do my workout. I started to feel a heavy feeling in my chest and slight pain, but it wasn’t too bad. I thought it was maybe anxiety or a bad panic attack, so I decided to just ignore it and push through my workout.”

After recovering from nausea and being light-headed, Portillo said she was feeling better so she went to her job performing as an exotic dancer.

“In the locker room of my job, I started getting hot, even though it was cold in there. … I started sweating a lot and was drenched even though I was wearing a bikini. Then my chest pain came back and this time it was more intense,” said Portillo. “The pain went to my back and to my left arm and my left arm went slightly limp, so I knew those were symptoms of a heart attack. I called 911 and the ambulance came.”

An NSTEMI (Non ST Segment Myocardial Infarction) heart attack causes less long-term damage to the heart than a “normal” heart attack, but healthy 20-year-olds shouldn’t be having any kind of heart attack.

As she was released, Portillo was told she could workout in 3 to 4 days, but to stay away from caffeine and watch what supplements she takes, “especially pre-workout, since it isn’t regulated by the FDA.”

Dr. Nicole Harkin, a cardiologist who spoke to Buzzfeed, said, “Aside from protein, pre-workout also typically contains a massive amount of caffeine, as well as artificial dyes, sweeteners, and emulsifiers. Taking such a large amount at once could certainly be detrimental to the body, by increasing the heart rate and blood pressure acutely.”

Portillo says she decided to tell her story on TikTok because she wanted to raise awareness.

“Being 20, I would’ve never assumed I’d get a heart attack from pre-workout,” she said.

“I just want people to be careful with what they’re consuming. Just because you see it online, even if it’s ‘fitness influencers’ doing it, doesn’t mean it’s safe. Being young doesn’t mean we’re invincible.”

Thankfully, her video about the dangers of dry scooping has also now gone viral, being viewed over 2.3 million times.