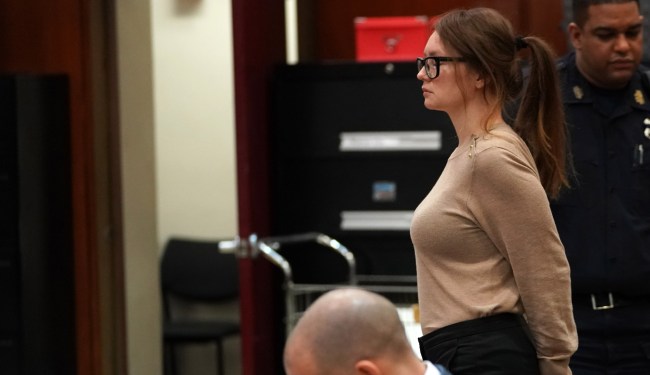 The last time we checked in on fake German heiress Anna Sorokin, AKA Anna Delvey, she was complaining about all the visitors she was getting while in prison.

“All you’re achieving by coming here is wasting your time and interfering with my sleeping schedule,” she wrote to her many wannabe friends.

Now, however, her many fans will have to find another way to get close to the convicted grifter as the 29-year-old has been released early from Albion Correction Facility in New York due to her good behavior while incarcerated.

Sorokin had previously told the parole board that she planned to live with a male friend once she was released, so maybe they can find her there.

“I just want to say that I’m really ashamed and I’m really sorry for what I did,” she told the board back in October at her parole hearing.

Sorokin, who went by the name Anna Delvey (and still does on social media), claimed to be worth 60 million euros and attempted to scam a $22 million loan to open a Manhattan art club.

She was supposed to serve four to 12 years in prison in May of 2019, so she didn’t even serve the low end of her sentence.

Taking to Instagram on Friday, Sorokin posted a selfie, wearing sunglasses, with the caption, “Prison is so exhausting, you wouldn’t know.”

She also posted her new Twitter handle, @theannadelvey, where she has been very active as well open letters she wrote to Harvey Weinstein and Donald Trump as well as a link to her website.

Hello there i missed you ❤️ pic.twitter.com/uJaoR7w01j

Planning on moving to Brownsville. Any tips?

Here’s a tip: sign a short lease because you’ll be getting deported back to Germany at some point in the very near future.

At least she will have a little spending money for her trip back as she reportedly signed a $320,000 deal with Netflix for the rights to her life story – $200,000 of which has already been earmarked for restitution.