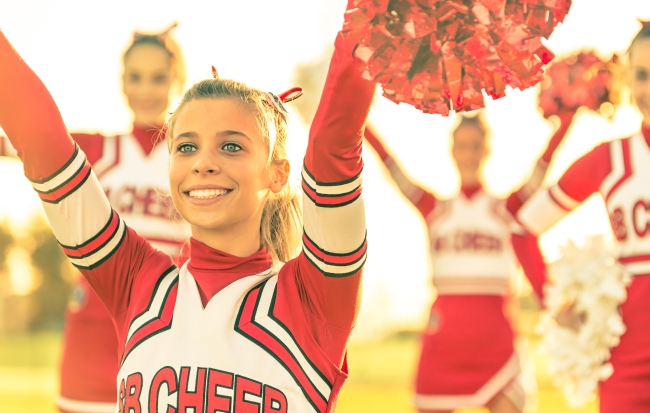 A fascinating case dealing with free speech, Snapchat, and a high school cheerleader might be heading for the Supreme Court:

It was a Saturday in the spring of 2017, and a ninth-grade student in Pennsylvania was having a bad day. She had just learned that she had failed to make the varsity cheerleading squad and would remain on junior varsity.

Though Snapchat messages are ephemeral by design, another student took a screenshot of this one and showed it to her mother, a coach. The school suspended the student from cheerleading for a year, saying the punishment was needed to “avoid chaos” and maintain a “teamlike environment.”

The student sued the school district, winning a sweeping victory in the United States Court of Appeals for the Third Circuit, in Philadelphia. The court said the First Amendment did not allow public schools to punish students for speech outside school grounds.

Next month, at its first private conference after the holiday break, the Supreme Court will consider whether to hear the case, Mahanoy Area School District v. B.L., No. 20-255.

First of all, a thousand plagues upon the snitch who took a screenshot and showed her coach mom. I’ll never understand the kids who are total open books with their parents in high school. Sure, keep your parents in the loop on big stuff. But if your mom knows more about the high school dating scene than half the kids? You need more friends your own age.

Second, this issue of whether schools should/can police what students say on social media has become a SERIOUS problem. It seems like we read five stories a year about some sorority sister or frat moron who gets expelled because he’s on Instagram saying the n-word. Those cases tend to be a little more cut and dry, but what’s the proper punishment for a cheerleader who says “fuck school” on snapchat? Is that really going to cause chaos? Will our pets’ heads fall off because a 13-year-old CHEERLEADER threw a tantrum on snapchat?! Dear God, grow up.

The online stuff gets murkier. Take the example of online bullying. Say your son went on Facebook one day and found a page dedicated to mocking his unibrow. It’s an active page, too, with over 40 participants. Kids taking secretive photos of your son in class, knitting his brow as he puzzles over an algebra worksheet. As a parent, you know two things: 1) kids are the meanest people on the planet, and 2) you can’t physically hunt down all 40 of the bullies and quietly disappear them without the authorities catching on. You might hit four before the alarms were raised. Even Walter White was only able to kill 10 guys, albeit in just two minutes across three prisons.

Meanwhile, your kid is destroyed. Confidence shot at 12 years old. Doesn’t play basketball so Anthony Davis doesn’t help. Hates himself, stays locked in his room, and no amount of therapy is going to move the needle. As a parent, who do you appeal to? Do you try speaking to the parents of these online monsters? Sorry, but that’s a dead end. Chances are, a bunch of those kids are being shitty to your kid because they’re starved for attention from their own disapproving, unloving parents. They’re lashing out to fill the dad-shaped hole in their own lives. Where are their dads? Drinking rail bourbon down at the Tipsy Goose until last call, avoiding their home like it’s infested with bed bugs.

You almost feel sorry for those kids. But then you scroll through their posts on the Facebook page for your son’s unplucked forehead mustache, and your blood boils over.

So you call the school. But the principal cites the first amendment and says there’s nothing they can do since it didn’t happen on school grounds. And your only hope rests with… the Supreme Court of the United States?

Cyberbullying is a nightmare. I saw it all the time when I was tutoring kids in New York. Kids are BRUTAL. They smell blood and everyone piles on. And it’s all happening online now—through finstas, snaps that get screenshotted and passed around, etc. It’s impossible to monitor the way they talk shit about each other. I guess you just have to hope your kid makes it to college, where he/she can find some decent friends who like the same stuff and won’t ruin your day because you accidentally put your pants on backwards.

These kids may not be sending hate from school, but their context and material is often derived from school. And if the school isn’t going to intervene, who will?

The Supreme Court typically prides itself on defending free speech. But this is the most recent precedent we can draw from:

And in the court’s last major decision on students’ free speech, in 2007, Chief Justice Roberts wrote the majority opinion, siding with a principal who had suspended a student for displaying a banner that said “Bong Hits 4 Jesus.”

Bummer. If they’re not going to help the Bong Hits 4 Jesus kid, can we really expect them to argue for the snapchat cheerleader?

Don’t give your kids iPhones until they’re 20.