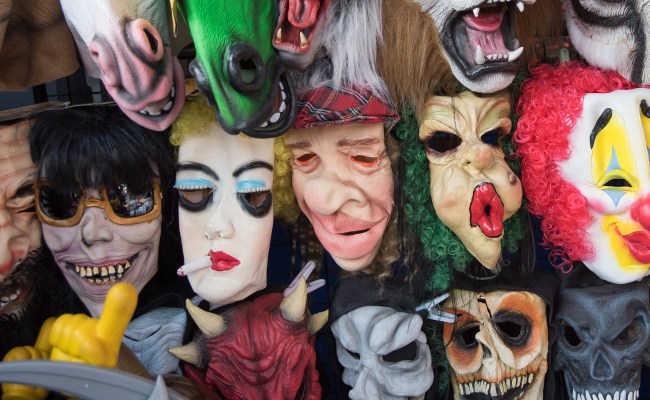 Have you locked down your Halloween costume yet? Time’s running out because the parties will kick off this Thursday. I decided to phone it in this year and invested in a ‘Where’s Waldo’ costume but the shirt’s actually from some designer so it’s comfy as hell.

I’ll be spending Halloween in Las Vegas this year seeing Phish for 4-nights and methinks the crowd I’m rolling with might be getting after it so a ‘Where’s Waldo’ costume seemed like a perfect way to ensure that I don’t get lost from the crew.

Yes, it’s the easiest possible costume choice there is. You buy a nice red and white striped shirt, the hat, glasses, and you’re good to go. But that’s what I’m looking for this year, simplicity. It turns out, I could’ve just rolled on down to my local costume shop and picked up a ‘Where’s The Stripey Dude’ costume instead of ordering the pieces separately on the Internet (like I did).

This Twitter Moments thread is amazing. A bunch of people shared the most hilarious knockoff costume names they’ve ever seen from the aforementioned Waldo-themed costume to ‘Video Game Guy’. The costume makers are looking to avoid any licensing fees here by skirting trademark issues and the result are some hilariously named costumes.

Show me your favorite knock-off Halloween costume. Right now, I'm team "Notionless" because the designer wanted to get to lunch and hit the thesaurus pic.twitter.com/Dm7omvckuz

This might be my all time favorite. The best part is the "or Padre" for just in case you decide you wanna change it up. pic.twitter.com/iaA5pSDKjA

‘Video Game Guy’ deserves to be in the Internet Hall of Fame.

I loved playing Video Game Guy as a child! pic.twitter.com/YJm2aDeera

I mean the laziness… pic.twitter.com/WdqRCqPy7H

Gomez Addams would be offended by the name of this one.

I didn’t think I needed to buy a costume for this… pic.twitter.com/hMWGXXsgmt

Other names they threw around were ‘kid forced into battle to the death.’

Tfw you eat in the library pic.twitter.com/z5rxzfC2kx

This just seems like a poor attempt at an Minions costume but I’m not really here to judge the costumes, just the names.

Who needs a Bob’s Burgers-themed costume when you can wear ‘supportive burger wife’?

This has to be skirting the edges… pic.twitter.com/NY0BlLco7f

I’ve been to Kansas a few times. This is not the Kansas I remember.

The official uniform of Kansas pic.twitter.com/PfkzsPG5Zg

This one’s cheating because it’s clearly from @obviousplant who goes around and puts fake products in stores or makes fake product signs to trick customers.

Did they miss any? As far as Twitter Moments goes this is one of my favorites from the past two months. By the way, you can always find me on Twitter at @casspa if you’re looking for pictures of dogs and mediocre tweets about college football, hockey, and Phish.