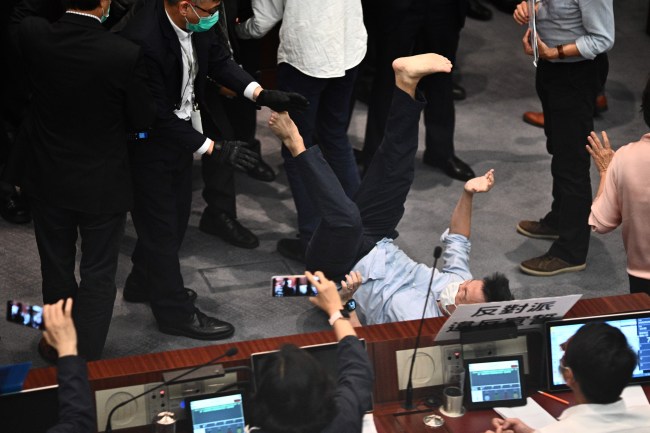 Pro-Beijing and pro-democracy lawmakers clashed in Hong Kong's legislature in a row over electing the chairman of a key committee https://t.co/yR6Jf6gLIG pic.twitter.com/DDC8Olz86Y

Politicians don’t make for great brawlers. They’re totally out of their element when it comes to 30 vs 30 royal rumbles. Despite what John Wick would have you believe, it’s very difficult to fight wearing dress shirts and ties. But that doesn’t mean these lawmakers don’t give it their best effort.

In this case, we’re looking at the pro-Beijing team vs the pro-Democracy team. I have a tenuous understanding of the political divide in Hong Kong, so let’s keep that out of it for now. It’s a slow buildup in this fracas, with one side holding signs up and crowding against the other team like a misunderstood game of Red Rover. But then you get these individual spilloffs, where guys are rag-dolling and dragging people around the floor.

Then out of nowhere, lawmaker Eddie Chu makes the ballsy decision to climb the wall:

Lawmaker Eddie Chu attempts in vain to scale the wall of the legislature behind the committee chair's seat. Photo: NowTV screenshot. pic.twitter.com/t6rHOAhyRc

It’s a classic break for higher ground. Unfortunately, Eddie seems to lose faith in his idea and resorts to finger-wagging from a slightly elevated position. I was definitely hoping for Mankind-Undertaker Hell In A Cell climb that led to Eddie supermanning into the opposition leaders below, but no such luck.

After that, you’ve got a few people being carried out without their shoes on. Not sure where their shoes went. Definitely better to keep your shoes on in a fight, but if it’s in an assembly hall, you only have so many things to throw at people. Shoes often get thrown in demonstrations of political opposition.

Overall, it’s a solid skirmish. But the crown still belongs to Turkey. Turkish politicians have practiced the subtle art of the aerial attack for ages. And when it comes to parliamentary brawls, Turkey is the GOAT.