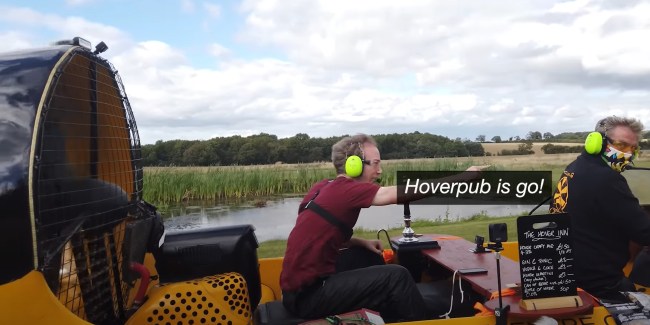 Liquor licenses are expensive, and can cost reportedly as much as $13,800 in California. In England, a “premises licence” can cost as much as $2,475. However, one astute gentleman found a sneaky loophole on how to not pay a licensing fee to serve alcohol, and it involves a hovercraft.

British YouTuber Tom Scott hosts his Things You Might Not Know channel, a series that has answered the critical questions such as “Why You Can’t Buy Dasani Water in Britain” and “British Plugs Are Better Than All Other Plugs, And Here’s Why.” For his most recent video, Scott who has over 3 million subscribers on his YouTube channel, showed how someone could skirt paying for a liquor license in England.

Scott exploited a loophole in the U.K.’s 2003 Licensing Act that allows people to sell alcohol without a license if it is being sold in a moving vessel that is on a journey. Here is the U.K. law that provides an exception to licensing on vessels, vehicles, and moveable structures.

One would assume that the lawmakers meant that the patrons would also have to be on the vessel that is selling the alcohol, but it doesn’t appear to make that distinction in the actual wording of the law.

Scott pushed the limits of the law by enlisting the help of professional hovercraft driver Marc Bradley Upton from the Axceler-8 Hovercraft Centre. Scott filled the hovercraft with booze, a beer tap, a contactless credit card reader, plenty of cups, some bartending equipment, and a reacher grabber arm to hand off the alcoholic beverages. He transformed the hovercraft into a hoverpub.

Scott served “hover craft” beer, gin and tonics, and a “hover martini,” which was just gin, vodka, and some grass clippings that blew into the cup. In order for Scott to legally sell the alcohol, the hovercraft had to be on a “journey” and had to be constantly moving. The hovercraft zooming around caused some spillage, and some poorly poured pints. But most importantly, he didn’t pay a dime to the government.