Ever Wonder How The F-Word Came To Be? Here’s The Science Behind Everyone’s Favorite Obscenity 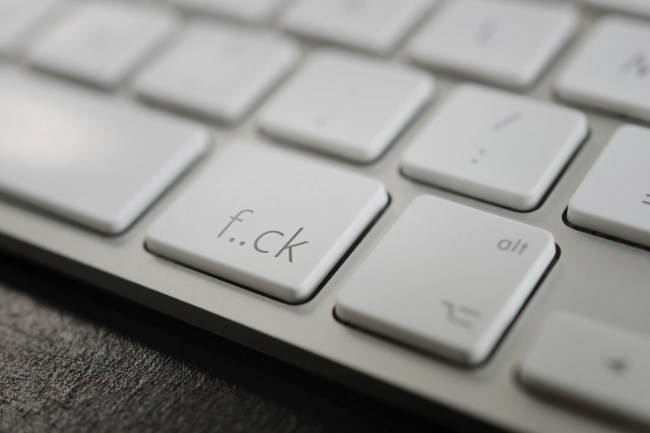 We often take our speech for granted.

Let’s say, for instance, you are standing in line at the concession stand at a basketball game waiting to order a couple of beers, a hot mess of nachos and a pretzel when all of a sudden some douchebag dad and his privileged young son finagle their way to the front of the line as though you were invisible.

Now, if not for our capacity to formulate certain sounds with our mouths, it would be difficult for any one of us in this or a similar situation to tap those freckled-face fuckheads on the shoulder and fiercely explain to them that they are on the verge of getting their filthy fun holes fingered by one Vernon the Vociferous, a vicious, vulgar vagabond from the foothills of West Virginia, if they don’t find another free spot for their fat-asses to frolic in the furthest most furrow.

It would also be next to impossible to relay to these fat-bagged fucknuts that you’re just seconds away from barfing up beef-chunks into their various orifices before fracturing their vertebrae if they don’t vacate the vicinity right fucking now.

As you can see, the use of the “F” and “V” sounds are ultra-important in the telling-off of a not-so-civil society in this day and age. It’s a gift that, according to some scientific minds, none of us would have the ability to flaunt if not for our ancestors deciding at some point they would rather eat real food than continue to gnaw on tree bark like wild fucking animals.

Researchers from the University of Zurich say humans may have never known the pleasure of spilling certain expletives for which the letters “F” and “V” are needed if our ancestors hadn’t switched to softer nourishment way back in the day.

They say once people started to learn it was possible to plant seeds in the ground and generate fields of leafy green vegetables, they got the wise idea that maybe consuming food that didn’t make them look like they had been chewing on gravel might be a solid way of life.

After all, dental care at the time was nothing more sophisticated than tying a bad tooth to the antlers of some sleeping beast and then pelting it in the ass repeatedly with a shower of sling-shot fire. The animal was either going to rise up and eliminate the tooth from its rotting domicile or turn on the people and lay the entire village to waste.

It turns out this decision provided modern ages with a wealth of obscenities to sift through whenever it comes time to express our malcontent. In fact, it is conceivable (or at least so they say) that without the advent of agriculture the F-word may have never risen into the vernacular infamy that it has achieved today.

This, dear friends, is no world we care to live in.

At some point in the post-Neolithic age, scientists say the human jaw started to transform in ways that made it possible for hide-wearing troglodytes to start uttering sounds that eclipsed the monkeyesque, jungle nomenclature they had been leaning on since the dawn of time. It was at this point that the phonations of the “F” and “V” started to become more prevalent in language and colorized the farmhouse dialogue in ways that people never could have imagined.

This language restriction is probably one of the reasons that the men of those times had no other choice but to draw pictures of lady parts on the walls of their huts when they wanted to get down. It’s not like they could articulate their quest for the ‘tang by vocalizing their interest in those fun bags, love muffins or even front butts.

Talk about a communication breakdown!

Still, the notion that diet had anything to do with the ability for humans to communicate without using a series of “oo-oo-ah-ah’s” has been mostly disregarded throughout the years. However, researchers claim they have uncovered some rather significant evidence that proves our speech capabilities were taken to new heights a long time ago as a result of the food choices made by our ancestors.

In studying jaw simulations, researchers found that softer foods made it possible for the evolution of smaller jaws and this allowed humans to keep that all-important overbite – something that makes it a hell of a lot easier to say words with “F” and “V” sounds.

This was consistent in every geographic location where early humans were known to have an “edge-to-edge” bite instead. Once these civilizations caught wind of farming, new noises started coming out of their mouths.

Experts say this makes perfect sense considering humans only use the sounds that come to them naturally. “Language is not just a random collection of sounds, but it’s biased by the sounds that are easy for us to make,” Mark Pagel, an evolutionary biologist at the University of Reading, told the Wall Street Journal. “We make sounds accidentally, and they get picked up by the language.”

So, the next time you verbally assault someone with words that would not be possible without the use of the “F” or “V,” just remember it was the innovations of our mangled-toothed ancestors that gave us this luxury. We cannot even begin to imagine where we would be without these sweet sounds in our vocabulary.

We’d surely be fucked beyond words.