If You Want To Survive Thanksgiving Dinner With Your Significant Other’s Family, Avoid These Topics 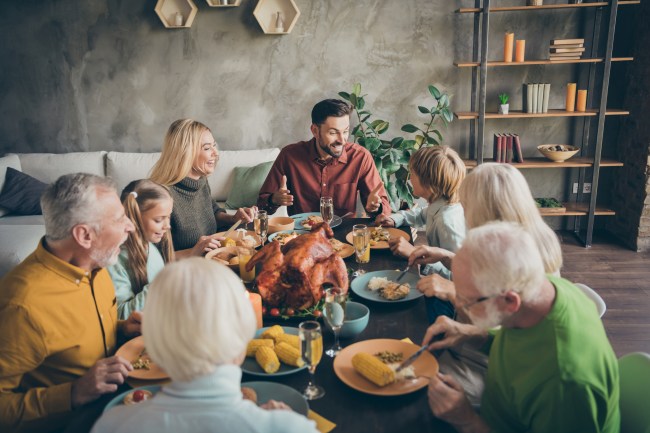 As if the thought of heading home for the holidays to mix and mingle with relatives that you haven’t seen since last year wasn’t already painful enough, there is a good chance that some of you poor bastards have been scheduled to attend at least one holiday gathering hosted by the family of a new girlfriend. This means stepping inside the proverbial lion’s den, venturing across enemy lines, where there will undoubtedly be dozens of snarling beasts waiting to see if you cut the mustard when it comes to enjoying the company of their precious, little girl. In a lot of ways, holiday feasts featuring a guest appearance by “the boyfriend,” sets the stage for the relationship. The girlfriend wants nothing more than for everyone to like him, and the family is just looking for a reason to call him a loser. Therefore, it is essential for any man in this position to put his best bullshit-covered foot forward.

We can’t have a strange family meeting the real you just yet. This means subscribing to the less-is-more approach when participating in those ever-so-popular holiday dinner conversations. Whatever you do, avoid these three topics like a prison rape.

Politics
No sooner than the girlfriend starts passing around a bowl of mashed potatoes, you had better believe there will be someone at the table – Dad, uncle Neil, cousin Kellie — launching into a full-blown tirade regarding the state of politics in the United States. Now, to a young man eager to make an excellent first impression, this might seem like the perfect opportunity to show everyone just how smart and in-tune he is with what is happening in this country. But make no mistake about it, this is a trap. One designed to see if he actually fits in with the overall attitude of the family. Revealing that you’re pro-Trump could get you banished long before the green bean casserole makes it to your end of the table. And, of course, refusing to show your political hand at all may leave an already suspicious group of relatives with the impression that you’re just one of those draft-dodging, hippy, Bernie Sanders-lovin’ pussies that is driving this country into a shithouse called socialism.

Listen, just shut up about all things politics, at least until you get a feel for the room. It also wouldn’t hurt to grill the girlfriend about her family’s political views beforehand, so you’re not walking blindly into a slaughter. But even if you do have all the conversational ammunition in the world to navigate a Thanksgiving townhall, do not (we repeat, do not) chime in on the subject unless you are asked. If you find yourself confused on how to respond to the question, “So, son, where do you stand on politics,” answering with some agreement to the girlfriend’s mom or dad is usually a solid move. But never make anyone in the family feel like an idiot for having conflicting views. This will only make you seem like an asshole and the rest of the day will be hell.

Religion
If someone at the table thinks for a second that you could be the man who ends up marrying their little girl, the subject of religion is bound to come up. They will want to make sure that you are spiritually compatible enough to build a life together and raise God-fearing children and upstanding adults.

If two people are of the same faith, everyone at the table is happy. But if they are of conflicting religions, the quality of a man’s baby-makers gets harder to sell. This is especially true if the guy’s faith happens to lean toward atheism or any other belief system that suggests that a supreme being is a sham and that the family is all foolish imbeciles for believing in such caca. It is for this reason that talking about religion during a Thanksgiving meal is never in the best interest of the new boyfriend. We don’t want to offend anyone at the table, nor do we want them burning us at the stake before it’s time for dessert. Save all of that hail Satan shit for when grandma isn’t listening.

Sex
Some families just like to have a good time during their holiday celebrations. While others are around the table discussing politics and religion, there are those households where the only focus is getting drunk, telling dirty jokes and just living it up as best they can before a food coma puts them down like a bad dog. These are the families where Dad might make a comment about giving Mom more stuffing that he did the turkey, and how the butter bowl might have a pube in it, so be careful.

It can be easy to get caught up in these ultra-loose, fun-loving family gatherings, too. So much, in fact, that it can put the visiting boyfriend enough at ease to get him participating in the sex talk, as well.

But the thing is, no family wants to hear some dude they just met talk about the weird or even funny sex stuff. It might even get your ass strung up outside and castrated next to a twelve-point buck. So have some respect. It’s okay to laugh at the family’s attempt at being sex-crazed comedians, but it is never wise to engage in this talk at the turkey table yourself.

So what can you discuss?
Anything else. Just keep the conversation as light as possible. Feel free to talk about sports, entertainment, college studies and even future aspirations. And, no matter what, always take a family’s teasing in good fun. It probably just means that they like you. Showing that you’re a good sport could make all the difference in how her family treats you from this point forward. Remember, you’ve still got Christmas to contend with yet, so blowing that first impression over Thanksgiving dinner is only going to make the rest of the year one full of dread and misery.