Is The Five-Hour Workday On The Horizon And Can It Actually Work? 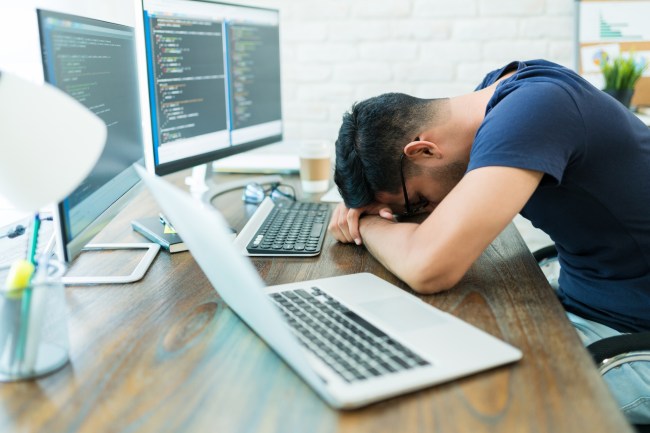 If there is one aspect about giving ourselves to the daily grind that really makes all of this working-for-a-living business a steaming pile of gazelle crap it’s that we have to be on the clock all damn day, five days a week. This means slaving away from morning until the early evening hours in pursuit of the paycheck that all of us need to keep the rent paid, the lights on and plenty of beer in the fridge.

But it sucks major ass to dedicate the majority of our time on this planet to a job just to afford a life where not much L-I-V-I-N is getting done.

Most would agree that it would be nice to put in fewer hours and still make the same money, so we could devote extra time to other projects, leisure or even family. Just imagine going to the office this morning at 8am knowing that your ass was as good as gone right after lunch. What would you do with yourself? One thing is sure, you would probably be a happier camper while sweating it out there for a few hours, and you might even become a more productive employee.

Some companies, like German-based Digital Enabler, are already experimenting with the concept of the five-hour workday. The idea is that workers will roll up their sleeves and focus on the tasks at hand if they are given a shorter window for which to complete them. It’s kind of like, “okay boys, let’s just knock this stuff out really quick so we can get the hell out of here and go have some fun.”

A recent piece in the Wall Street Journal indicates that the company’s CEO, Lasse Rheingans, recently implemented a shorter workday as a means for motivating employees and making them more productive.

But there is a list of rules that must be adhered to for this idea to work.

For starters, everyone must give up their cell phones – they are not permitted in the production area – and there is absolutely no social media browsing or office socializing. Anyone wanting to discuss the game, gossip or any of that other shit that is typically done in the early morning hours before workers slip into a groove, must wait until the day is done. Digital Enabler’s employees start work at 8am and they grind it out until 1pm. That would be especially welcomed now that Daylight Savings time is over and it’s officially getting dark at 5:30 every evening.

So far, Rheingans says employees seem happier, and they are cranking out higher quality work for clients. The CEO is hopeful that a shorter day will also prevent workers from burning out and enduring mental health issues as a result.

But workers all over the world (especially in the United States) are still so locked inside of that old school “got to work, work, work,” mentality that it could be challenging to make the transition from 8-12 hour days to five hours and done. This is something that might be especially difficult for the older generations to grasp without their heads spinning off their shoulders.

And there are definitely some problems when it comes to getting workers completely on board. For example, many of them are experiencing added stress because they feel like they have to complete 8 hours of work in a shorter period. Some even complain that it is difficult not being able to text and talk with family members for five hours at a time. But other than that, it seems to be working.

The concept of the five-hour workday was not Rheingans’ idea. He borrowed it from Stephan Aarstol, the CEO of Tower Paddle Boards.

Last year, Aarstol wrote a column for Thrive Global saying that a shorter workday was the best way to ensure employees were always at the top of their game.

“Just because you’re at your desk for eight hours doesn’t mean you’re being productive,” he said. “Even the best employees probably only accomplish two-to-three hours of actual work. The five-hour day is about managing human energy more efficiently by working in bursts over a shorter period.”

In the beginning, Aarstol said, the five-hour day worked like a charm. But then something happened, and it began to fall apart. A recent article from Forbes suggests that Tower Paddle Boards’ “employees enjoyed their time off a little too much,” so now, shorter days are only done during the summer months.

Considering that there isn’t shit to do in the winter anyway, we think that is a relatively fair trade-off.

But is this something that companies in the United States could ever embrace without the fear that it might bankrupt them? Maybe, but it all depends on the type of business. Fortunately, there is a broader gig economy now than ever before, which makes it easier for people to work fewer hours or keep schedules lighter when necessary. It’s an idea that we could see become increasingly more popular with the younger generations. These folks are more focused on wellness and maintaining balance in their lives than the blue-collar grinders that came before them.

Still, there is some concern that the average customer might not dig this idea at all. People like to think that there is at least someone sitting behind a computer someplace that can help them with a problem if one should arise. Nobody, and we’re talking nobody wants to wait for service just because a company subscribes to a shorter workday. These issues could be solved by creating additional shifts, but probably not without totally zapping a company’s bottom line. And will workers enjoy five-hour workdays so much more than the traditional eight? Probably not if they are all of a sudden held to a higher standard of discipline around the office – limited bathroom breaks and no idle chatting — in order to get it. Workers enjoy fucking off way too much for that kind of sacrifice.