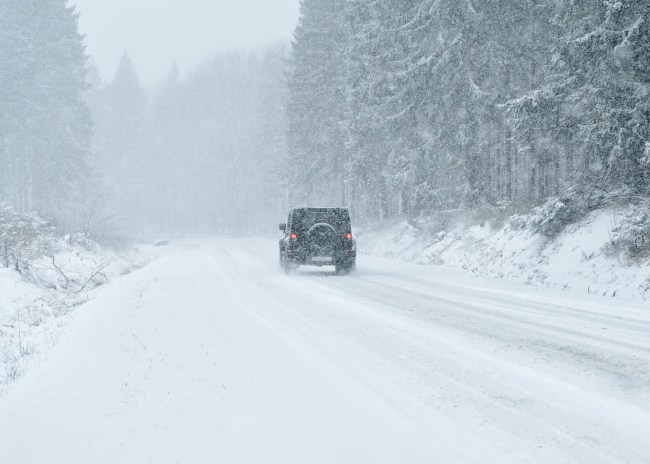 There is no easy way to say this, gentlemen, but winter is coming. It is that harsh-as-hell season that only psychopaths seem to enjoy, where mounds of snow and ice are always raining down from the heavens as a cruel reminder that this strumpet we all know as mother nature has a sick sense of humor.

For the most part, though, thanks to evolution and technology, most of us can beat the cold by merely staying indoors for a few months, paying the heating bill on time, and waiting for the Spring thaw to come down the pike. This alone can prove challenging, however, given the possibility that cabin fever will strike right around January and set some of the emotionally fragile up for a “Here’s Johnny” moment.

Might we suggest putting all of your axes and hatchets into storage for a few months?

Where a lot of people seem to go wrong this time of year, in the months before it gets dick-ass cold, is failing to properly winterize their vehicle. We realize that this might sound like the last thing you want to fuck with ahead of the holiday season, but we’re here to tell you that taking some preventative measures now might keep you from being left stranded and freezing to death along the side of the road. Anyone who’s been there understands that this situation is tantamount to torture.

Replace Those Godforsaken Wiper Blades
Driving in the snow and ice is bad enough. But getting caught behind some asshole trucker while his 18-wheels are kicking up mud, slush, and all sorts of other roadway smegma onto your windshield only stands to make the journey worse. This is especially true if you have old wiper blades that look more like an angry squid than a device meant to provide you with a clear field of vision in treacherous road conditions.

Some of the signs that your wipers need to be replaced are if they are making scratching noises or leaving marks on your windshield. This is only going to get worse in the winter weather. So do yourself a favor and get those bastards changed before the first snowfall. And while you’re at it, be sure to top off your wiper fluid reservoir with a brand that can sustain below freezing temperatures.

Make Sure Your Tires Are In Good Shape
One way to ensure that you’re not out there on the road this winter trying to stop from shit-whipping your vehicle into telephone poles, ditches, and other motorists is to make sure the tires are in good shape. This is winterizing 101, fellas. If the tires are worn down, showing wires or they’ve been on the vehicle since your Uncle Joe sold it to you a decade ago, we would suggest getting them replaced. Because more than just allowing your vehicle to handle better in less than pleasant driving conditions, new tires will also substantially decrease the possibility of a blowout or a flat at the most inopportune time. There is nothing worse than trying to change a tire along a stretch of road while shaking from the cold like a dog shitting peach seeds. Trust. Some of you in parts of the country where the winters are the cruelest may even need to consider snow tires. Also, be sure that the spare tire is inflated correctly, and that you have a decent jack in the trunk. Trying to change a tire with one of those cut-rate jacks that come with the car is never fun. You’d be better off beating yourself in the head with it until you were dead.

Check Your Antifreeze, Belts And Hoses
For those dudes who have been riding around all Summer long with straight water coursing through their radiators, it’s time to add some antifreeze to the mix. The recommended ratio is 50:50. For the mechanically inept, that’s half water, half antifreeze. This coolant mixture is enough to prevent the radiator from freezing up when temperatures outside get colder than a witches tit.

And while you’re at it, take a hard look at all of your belts and hoses. If you notice that any of them are cracked and deteriorating (something that just happens over time), it is best to get them replaced before winter comes. Colder temperatures are only going to make it more likely for these things to snap. And a busted hose is all it takes to leave a motorist stranded on the road. Of course, then there will be the added expense and inconvenience of having to call a tow truck.

Make Sure The Battery Is Strong
Another simple but often overlooked part of winterizing a vehicle is making sure the battery is strong enough to withstand winter. You don’t want to go outside in the morning when it is bone-chilling cold and not have your vehicle fire up because the battery just doesn’t have enough juice.

So, if it has been a few years since you’ve replaced the battery in your vehicle, it might not be a bad idea to get a new one. Even if the engine seems to start just fine right now, the winter months are going to take a toll. Your vehicle is going to require more battery power the colder it gets outside.

Battery strength can be tested by mechanics and some auto parts stores. Even if it doesn’t need to be replaced, cleaning the corrosion of the connections and making sure it is filled with the necessary water might get you through the season. But batteries are fickle little hookers that can’t wait to crap out.

If you can afford it, buy a new one.

Pack An Emergency Supplies Kit
Very few of us are ever really prepared for our vehicles to die on us when we need them the most. And even if you were diligent about getting your ride tuned-up for the winter, there is always a possibility that something could go wrong and you’ll end up stranded anyway. As much as this sucks a big one, tossing a few essential supplies in the trunk just in case of emergencies is a solid move in making the experience less excruciating. The trick is not to die while waiting for help to arrive.

Here are a few things that you might need: Jumper cables, tire pressure gauge, portable air compressor, phone charger, fully charged burner phone, first aid kit, warm blankets, bottled water, protein bars, flashlight, ice scraper, shovel, tow strap, and emergency flares. If you can manage to round up all these supplies, you will have almost everything you need to survive any unsavory situation while on the road.

Let’s just hope that you never need any of it.