Science Explains The Reason Why Raking Leaves Is For Suckers 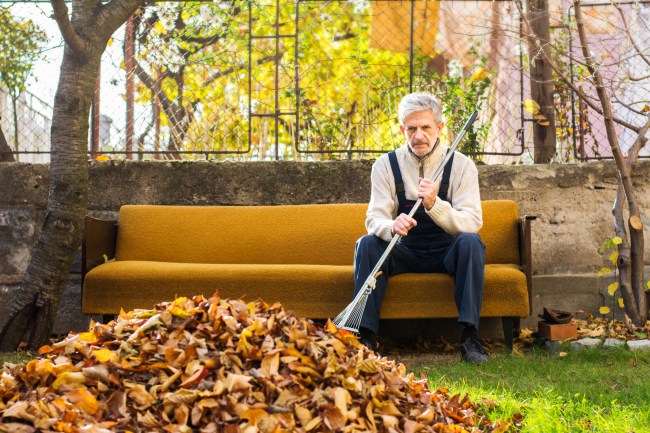 Fall is that magical time of year when a whole heck of a lot of cool shit gets underway. There is, of course, football, the start of the NBA season, Halloween, and it becomes perfectly acceptable to eat chili for dinner every fucking night of the week. But then again, there is also the looming of the holidays and everything starts going dark before 5pm. Yuck! So, maybe fall is not the Rockstar season that it is cracked up to be. In fact, aside from providing us with a timely refuge from the sweltering summer heat, the season is nothing more than death, a gateway to a long, dismal winter that will knock its fair share of folks into a depression so foul that they won’t feel like themselves until Spring. Yeah, man, this is the beginning to some rather dark days. So why in God’s green earth would you want to add to the misery by spending your weekends raking leaves?

Because that’s what you’re supposed to do, right?

From an early age, our fathers showed us that keeping the lawn perfectly manicured is just one of the burdens of being a man. It didn’t matter what sort of shit that old bastard had going on at the time – he could be on the couch taking a nap while Bob Ross painted “happy trees” on the tube, or nine beers into a wicked Saturday bender — he had to rush outside and start cutting the grass the second he heard one of the neighbor’s mowers starting up. But the insanity didn’t stop there. 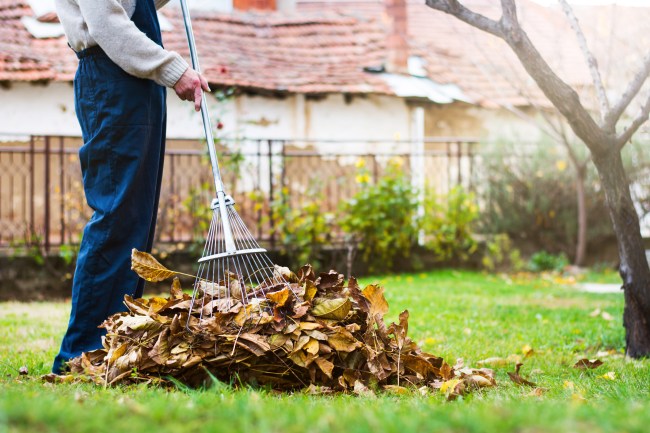 It was just as important to him to make sure the yard was devoid of leaves by the time the first snowfall came around. He’d dedicate himself to the cause every night if he had to, and he was diligent to a fault. He might rake them all up on a Sunday, but sure as shit, that fool would be back out there on Monday evening after work to get what the trees dropped when he wasn’t looking.

For guys like this, allowing a single leaf to linger around until spring is tantamount to using a shit-stained sofa as a lawn ornament and accentuating the white trash flair with an old toilet, a broken down Granada and a goat. It was the kind of thing that when asked, “Hey dad, why are you always out here fucking around in the yard?” he’d fire back with something like, “Because, dumbass, we might be poor but we don’t have to look like we moved here straight from the trailer park.”

Indeed, having a lawn, for some men, means coming home from their full-time jobs and completely ignoring their families to keep it looking presentable. It is just normal for dudes over 40 to be outside every waking, free minute to try and stop mother nature from doing its thing on their property. But aside from keeping up with the Joneses in some respect, there really is no benefit to raking leaves, according to an article from Popular Science. It is actually more beneficial to just leave them be.

Maxim Schlossberg, an associate professor of turf grass nutrition and soil fertility at Pennsylvania State University, recently told the publication that the best course of action is to just mow over them a few times. In turn, this will create mulch and all of their nutrients will be absorbed into the lawn, making it healthier, greener and even thicker. Hell yeah! That’s the real secret to sticking it to those neighbors who are always trying to one-up a motherfucker. Just pop open a beer and take a little joyride on the Cub Cadet, mowing down all of the leaves into tiny shreds.

“It is a bit like chess, one of the best defenses is to have a good offense,” Schlossberg explained. “Just make sure the last mow of the fall is after all the leaves have dropped.”

Now, don’t think for a second we didn’t consider the possibility that some men just spend a lot of time out in the yard to get away from their old ladies. We are quite sure there are thousands of well-groomed lawns out there in the world simply because a guy got sick and tired of getting nagged every time he plopped down in front of the television. To those dudes, we say, go ahead and rake your ass off. Just know that it’s okay if you lose the lawn tools and all of those Hefty bags in the divorce when the time comes to trade her in on a younger model. You won’t be needing them anymore.