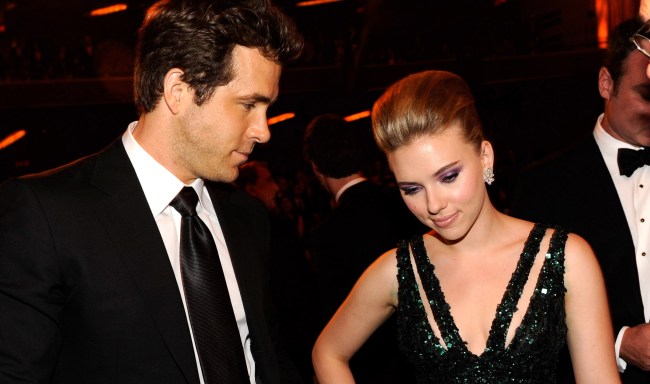 Aside from the “feud” between Kevin Hart and The Rock, Ryan Reynolds and Hugh Jackman easily have the best rivalry going in Hollywood.

Their continuous trolling of one another is a great source of amusement, and has been so for many, many years (and continued on Thursday with Jackman wearing some of Reynolds’ Aviation Gin gear – see below).

Busted. I thought it best to share this before the paparazzi do. (In my defense, it’s all that’s clean.) pic.twitter.com/TlzaS1VoNk

In fact, the friendly rivalry between Jackman and Reynolds goes back so far it involves the Deadpool star’s first wife Scarlett Johansson, who he was married to from 2008 to 2011.

“How did it start? It’s gone back so long now…” Jackman told The Daily Beast. “God, this is a classic sign where your feud has gone too long, where you don’t even know why or how it started! [Laughs] I met him back on Wolverine, and I used to ream him because I was very close friends with Scarlett [Johansson], and Scarlett had just married Ryan, so when he came on set I was like, ‘Hey, you better be on your best behavior here, pal, because I’m watching,’ and we started ribbing each other that way, and then it all escalated with the Deadpool thing and him calling me out, and trying to manipulate me through social media to do what he wanted. [Laughs]”

Last week, Jackman celebrated his 24th wedding anniversary with an Instagram post showing a vintage photo of himself and his wife Deborra-Lee Furness.

“These 24 years have been the best of my life! And, as far as I can see, we keep getting better. I love you Debs with every fiber of my soul. Happy anniversary. #24,” Jackman wrote.

Reynolds, as he always does, had to chime in with a comment mocking his buddy, “Hang in there, Deb.”

When asked if he is currently in the planning stages of his retaliation for the comment, Jackman replied, “I try to limit it to five hours a day, planning retribution. I’ve found in the past that it just gets unhealthy if it’s more than five hours of obsessing over how to get Ryan Reynolds. But five hours is good and healthy and keeps me strong and ready. [Laughs]”

Jackman also addressed how he feels about Disney/Marvel eventually recasting his iconic role of Wolverine.

“I knew it was the right time for me to leave the party—not just for me, but for the character,” he admitted. “Somebody else will pick it up and run with it. It’s too good of a character not to. It’s kind of like, you’re on your way home and your friend rings you and goes, ‘Oh, dude, a new DJ just came on and the music is awesome, are you going to come back?’ And you say, ‘Sounds good but… no.’ They’re fine with someone else.”

Hard to believe that this year is the 20th anniversary of Jackman’s first appearance as the legendary X-Men character. And while Jackman may be ready to hang up his claws, one of the other original X-Men, James Mardsen, just jump started the hearts of fans everywhere by breaking out his Cyclops specs while on a video call with his Sonic the Hedgehog co-star Ben Schwartz.