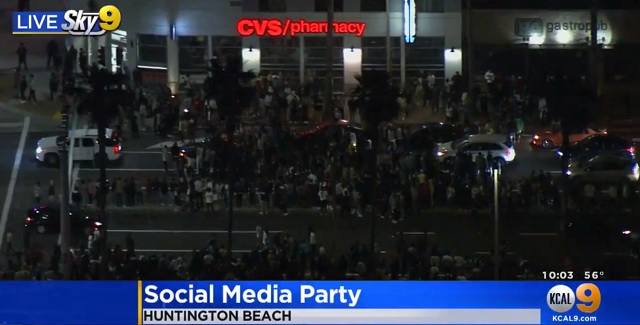 Huntington Beach descended into chaos after police clashed with hundreds of people who came out to attend a birthday party dubbed “Adrian’s kickback” that was promoted on TikTok and quickly went viral.

On Saturday night the Huntington Beach PD put an emergency curfew in place from 11:30 p.m until 5:30 a.m. Sunday after an unlawful assembly was declared due to “unruly crowds”.

Unlawful assembly has been declared in #HuntingtonBeach due to unruly crowds. An emergency curfew has been put into place effective 5/22 at 11:30pm through 5/23 at 5:30am for all individuals within the downtown area.

Earlier this week, Adrian’s Kickback was first promoted by TikTok user adrian.lopez517 who posted a video with a flyer that included a caption that read “pop out n celebrate my bday.” 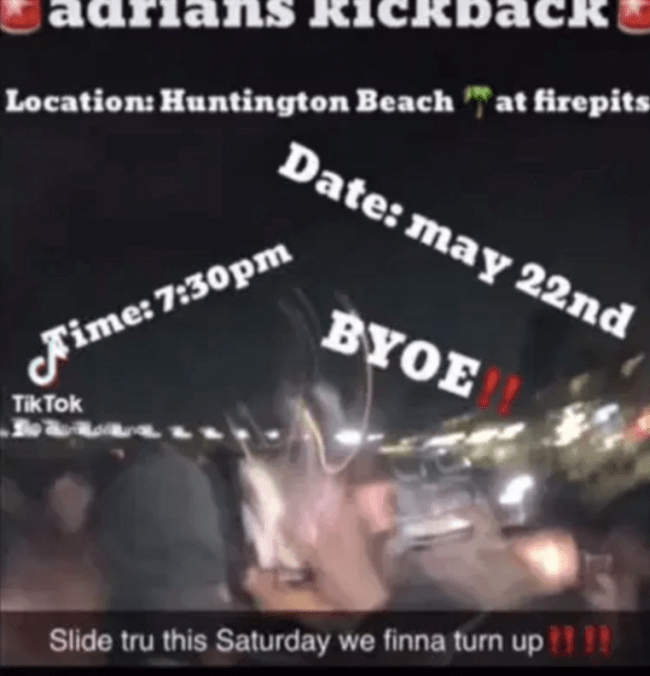 Going into Saturday night, the hashtag #AdriansKickback had over 180 million views on TikTok that featured videos of people talking about their plans to attend the event.

I found Adrian from Adrian’s kickback! and his friend who posted the original viral TikTok. The hashtag #Adrianskickback has over 180M views on TikTok as of today pic.twitter.com/pzwUHX0ble

As Adrian’s Kickback went viral on the social media platform, the Huntington Beach PD prepared for a large gathering in the city.

“As is the case with ALL large gatherings in #HuntingtonBeach, we have taken steps to prepare for a potential increase in visitors this weekend due to a promoted gathering that has received significant interest on social media.”

Hundreds showed up for the party at Huntington Beach as documented in social media videos.

Police are doing their best to block streets and keep party-goers in downtown Huntington Beach under control. The pop-up party started with a TikTok video invitation that went viral. https://t.co/bWYhx0t5ga pic.twitter.com/jrLsA1OhyP

Indeed, #adrianskickback is very alive and well here in Huntington Beach. Many many people in the street, crowding cars. pic.twitter.com/BQ93wupwFl

Go to Huntington Beach on the @Snapchat map right now. It does not disappoint 😂😂 pic.twitter.com/y7i4l5hCCW

Huntington Beach PD attempted to get the crowd to disperse by shooting less-lethal rounds at partygoers.

Less lethals deployed. Lots of folks running away, going about one block down to another area where there is a lot of partying. pic.twitter.com/XhN6544eK1

Things started getting out of hand when people started throwing bottles and firing off fireworks towards the police.

Police dropped some pepper bullets. Firework thrown at police. I was just hit by less lethal munitions in bio and… back of head. #adrianskickback pic.twitter.com/hlwpk1Ah1Z