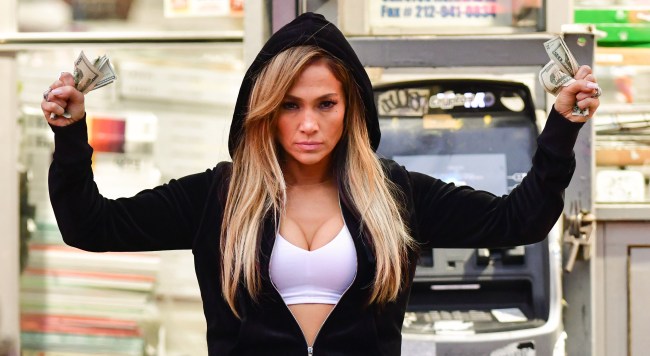 Jennifer Lopez’s new movie Hustlers is getting a lot of buzz after a $45 million opening weekend. There has even been talk of Lopez possibly getting an Oscar nomination for her role as Ramona Vega, the main character of the movie based on the life of Samantha Barbash.

Barbash, however, isn’t seeing a dime of those millions. Something she made very clear in an interview published by TMZ on Wednesday.

“It’s about my life. They pretty much basically stole my story,” Barbash told TMZ. “I wouldn’t sign my rights away … I wasn’t giving up my TV and film rights for peanuts. J.Lo doesn’t work for free. Why would I? I’m a businesswoman.”

When asked how they got to make the movie, which was also executive produced by Will Ferrell, Adam McKay and others, without her signing off on it, Barbash replied, “You tell me. It’s Hollywood.”

Barbash’s lawyer Bruno Gioffre told Page Six, “The movie is based on court records from the trial and a New York magazine interview of one of the co-defendants in the case against dancers at Scores. Although Samantha wasn’t a dancer at that time, we believe the movie and Jennifer Lopez’s character is based on her. We plan on seeing the movie before deciding on what steps to take.”

As for what she tought of the movie itself, Barbash told Vanity Fair, “I wasn’t really that impressed. I was impressed with Jennifer. She was incredible. Her body looked incredible. She had it down to a T, but it wasn’t factual.”

For the real facts, she says people should read her new memoir Underscore, which she says is like Fifty Shades of Grey meets Molly’s Game.

One of the other women the movie is based upon, Roselyn Keo, aka Destiny in the film, isn’t nearly as salty, issuing almost zero complaints in a recent interview with The Oprah Magazine.

She even went to the movie’s premiere.

Her only issue was that Constance Wu’s portrayal of Destiny was too timid.

“That’s not me,” said Keo. “Sure, maybe the first day I was shy…you’re the new girl, but eventually you learn to at least pretend to be tough, because in there you’re going to get eaten alive if you don’t. I learned that works with the guys, but that doesn’t work in the dressing room.”

She too has published a memoir, The Sophisticated Hustler.