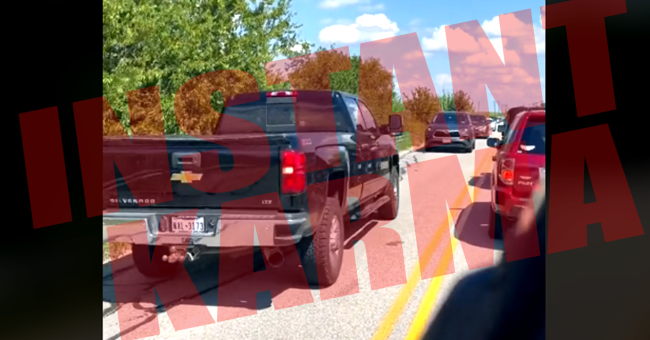 Then there are the viral TikTok videos where someone doing something really stupid gets their comeuppance – AKA instant karma videos.

Today we have one of those videos. And it is glorious.

The video, posted to TikTok by Josh Ryden (@bryce_jr13), is short, but very sweet.

It takes place in Austin, Texas and appears to be filmed while Josh was in a long line of cars waiting to pick up their kids at a school.

This fool tried to jump in line 🤣. ##karma ##texasheat ##texasliving

Related: TikToker Blows Millions Of Minds With Her Uncanny Resemblance To Scarlett Johansson

Many were quick to say something to the effect of, “Of course it was a truck owner.”

Many others just spoke the truth.

“Oh no, you don’t mess with the pickup line!” emphatically stated one viewer.

“I swear pick up and drop off lines bring out the crazy in people thinking their child is more important than the next,” someone else wrote.

“When your wife needs you to pick the kids up and it’s your first time,” joked another.

“Nah bruh… we sit there for 30 mins. NOBODY cuts,” commented another.

The best comment, and probably most accurate comment, however, was one person who wrote, “The backup of shame lol.”