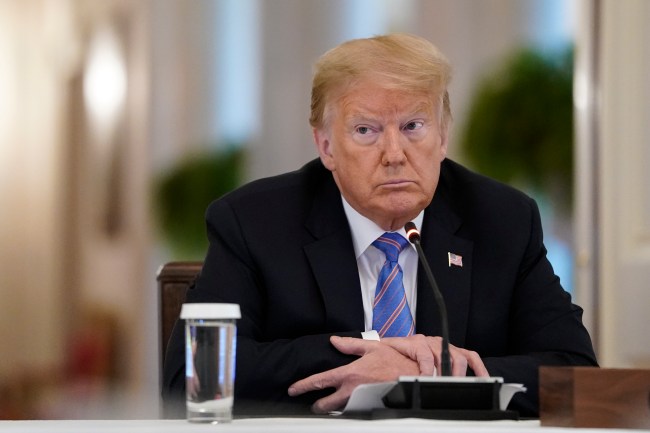 Iran has asked Interpol to issue a "red notice" for Trump and the other individuals the Islamic Republic accuses of taking part in the killing of Soleimani. https://t.co/vyzanIjWqH

While President Trump faces no danger of arrest, the charges underscore the heightened tensions between Iran and the United States. https://t.co/mdVZr65V3L

Get a load of Iran, issuing arrest warrants for the world’s most powerful people. I’ve always been a “shoot for the moon” guy myself, so I don’t hate it. This is like an 8th-grader asking a senior girl to prom. Uh buddy… you’re 13. You don’t have invitation power. Wait a few years, start lifting weights, don’t touch that mustache fuzz, and before you know it, you’ll be tipping back a flask of Jaeger in the woods behind some catering hall in a rented tuxedo.

US Special Representative for Iran Brian Hook called the move a “political stunt” during a joint press conference with the Saudi Minister of State for Foreign Affairs Adel al-Jubeir on Monday.
“It’s propaganda that we’re used to,” Hook said. “This has nothing to do with national security, international peace or promoting stability, so we see it for what it is — it’s a propaganda stunt that no one takes seriously and makes the Iranians look foolish,” he added.

Up next, Iran is gonna hit the Pope with a 300-yard restraining order from school zones. For lunch, a call for Barry Bonds to admit he knowingly took steroids or so help them GOD, he’ll never get their vote for Cooperstown. Sorry Iran, this isn’t Pinocchio—you can’t just wish upon a star and expect POTUS to come quietly, hand over his shoelaces and his belt, and hope for early parole. But good try, good effort, keep doing you guys #ShootersShoot.