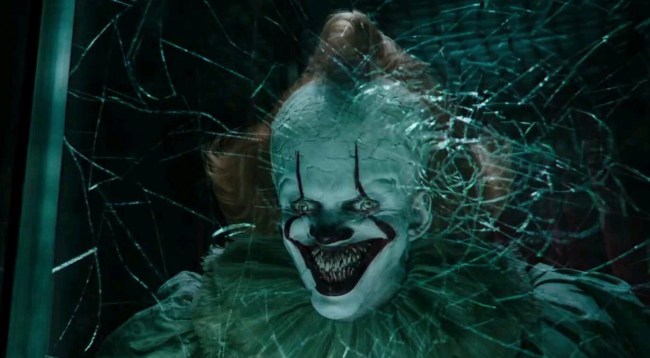 The first IT movie, which came out in 2017 and blew audiences away to the tune of a worldwide total of $700.4 million against a production budget of $35 million, was two hours and five minutes long.

Those 135 minutes were filled with a great narrative (thank you, Stephen King), non-stop jump scares, and had viewers on the edge of their seats to the very end.

Which all means that IT: Chapter Two has some very big (clown) shoes to fill when it comes to keeping audiences interested and entertained throughout its recently announced 2-hour, 45-minute runtime.

Pennywise actor Bill Skarsgard has already gone on record as saying the demonic clown at the heart of the story is going to be even “angrier and scarier” than he was in the first film, and Jessica Chastain, who plays adult Beverly, said there’s one scene that has “the most blood that’s ever been in a horror film,” so that much is promising, but what else can we look forward to seeing?

According to the film’s director Andy Muschietti, he had no problem filling the lengthy runtime with scenes viewers will want to watch.

“A movie is very different when you’re writing the script and you’re building a story compared to what the final product is,” Muschietti told Digital Spy.

“At the beginning, when you’re writing and building the beats of the story, everything that you put in there seems very essential to the story. However, when you have the movie finally edited and it’s 4 hours long, you realize that some of the events and some of the beats can be easily lifted but the essence of the story remains intact.

“You cannot deliver a 4-hour movie because people will start to feel uncomfortable – no matter what they see – but we ended up having a movie that is 2 hours and 45 minutes, and the pacing is very good. Nobody who’s seen the movie has had any complaint.”

Considering Avengers: Endgame clocked in at three hours and one minute, and just broke the record for highest-grossing film pf all time, people apparently don’t mind sitting there that long if the movie is good.

However, even with the combined 4-hour, 46-minute runtime of the combined films, there is a lot more that didn’t make it into either movie.

The good news is that producer Barbara Muschietti has promised there will be a director’s cut released when the movie is done with its theatrical run.

“We will put out a director’s cut because this time it definitely merits it,” said Muschietti. “We have some amazing scenes that didn’t make it into the movie. You have to make choices sometimes and some things cannot be in this theatrical release but are definitely worthy of people seeing them at a later date.”