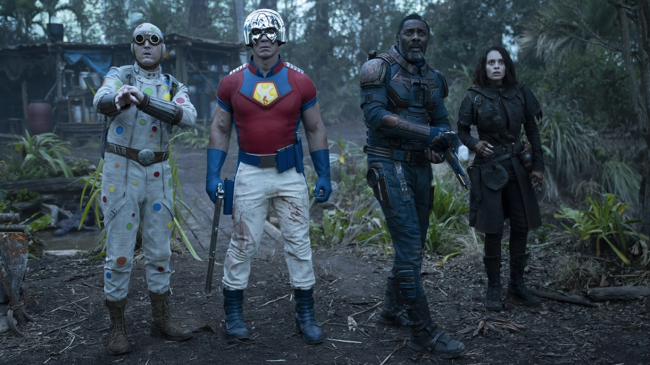 Warning: The Suicide Squad spoilers below.

James Gunn, the director of The Suicide Squad, recently spoke with Variety about several topics including his new film currently playing in theaters on HBO Max, that time he got fired by Disney over some controversial tweets (then rehired), and why his movies being released on streaming services is just fine with him.

One of the big topics of conversation was a scene in The Suicide Squad that had him a little jittery as to how it would be received by both the viewing public as well as his bosses at Warner Bros.

If you have seen the movie, you can probably guess which scene it is – the one where Bloodsport and Peacemaker decimate an entire platoon … of good guys.

Gunn says he got a little pushback on it as well as a scene with Rick Flag and Starro.

“The the stuff with Bloodsport and Peacemaker, I had a lot of reservations about,” admitted Gunn. “I loved the sequence. It’s funny and it goes to the heart of what the movie is about, for me, in terms of Bloodsport’s journey of starting to learn that being a man and being a leader is not synonymous with being a toxic man, and that the path forward to true manhood is through vulnerability. That [sequence] is a big part of that — just a big dick swinging contest between two people. But, man, even watching it the other night in the theater, that’s the one place I go, holy shit, we pushed it far — like, it’s at the edge of where we could go with that. There were some Warner Bros. execs who brought up, “Is this the one place that we go too far?” I think that’s when I added, you know, Amanda Waller explicitly tells them to go into the camp and kill everyone. So they are following her orders, and she is in a way the antagonist in the film. So anyway, yeah, I had reservations about that.

“About the political stuff downstairs [in Grieves’ lab], you can see at the end of the movie, there’s a shot with where Amanda Waller is looking at all the footage they have that Bloodsport has sent them [of the Starro experiments], and one of the pieces of the footage is the old president of Corto Maltese and Ronald Reagan together. That used to be a little bit more prominent. I pulled it out simply because it seemed to be unnecessarily distracting to the central story.”

Gunn also spoke about how getting fired by Disney in 2018 from the Guardians of the Galaxy franchise shaped how he directed The Suicide Squad and other films since.

“Most of me making movies has always been about I love to tell stories,” explained Gunn. “I love the creative process. But another part of me wanted to be rich and famous because I wanted to be loved. I didn’t feel that and I never was able to experience that. And the beautiful thing of what happened 2018 is that I got fired and I felt as if every single thing in my life was gone. I had nothing. In that moment, I experienced more love from the people around me than I had ever experienced in my life — and truly experienced the feeling of being loved for the first time in my life.”

As for his movies being released on TV as opposed to or in addition to in theaters, Gunn says, “I don’t really care that much. I really just care about whatever the project is in front of me. The Suicide Squad is made to be seen first and foremost on a big screen. I think it’s gonna work just fine on television. Listen, movies don’t last because they’re seen on the big screen. Movies last because they’re seen on television. Jaws isn’t still a classic because people are watching it in theaters. I’ve never seen Jaws in a movie theater. It’s one of my favorite movies.”