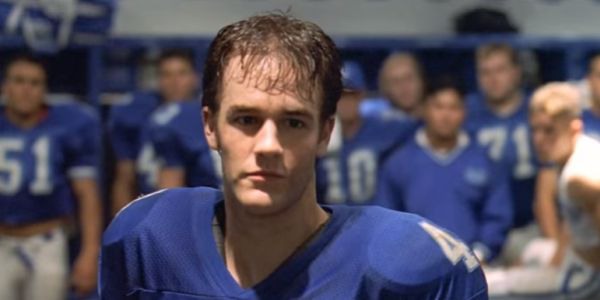 I was proud of myself. I held out from the Aunt Becky news for one full day in an effort to preserve my childhood, but eventually I had no choice but to surrender to its ubiquity. Speaking of crushed childhoods, probably shouldn’t have watched Leaving Neverland either, but that’s an issue for a different time. Or my therapist.

For those who have still held strong, let me ruin your pristine image of Uncle Jesse’s wife and father to his two mophead kids.

The 54-year-old Full House star and her husband paid $500,000 to get her two kids into USC by pretending they were going to join the crew team on scholarship, the hallmark story in a larger fraudulent scheme that led to federal charges being filed against 50 people who used cheating on exams and faking athletic profiles as recruits to get their children into a college they wouldn’t otherwise be admitted to.

The bombshell allegations produced some very fine mockery content from interneters all over the globe, but the finest troll was originated from the Justice Department, who dubbed the bribery scheme OPERATION VARSITY BLUES. Varsity Blues, of course, is an excellent high school football film from 1999 in which helicopter parents want nothing more than for their children to fulfill their broken dreams.A

After learning that the investigation has been named Operation Varsity Blues, Varsity Blues star James Van Der Beek came from the top rope to deliver a response that belongs in the Smithsonian museum.

If only there was a succinct turn of phrase these kids could have used to inform their parents they were not desirous of their life path… https://t.co/cxOTDI5J1B

The succinct response he’s alluding to is something that is imprinted on dude’s brain who grew up in the 90s.

In the movie, Van Der Beek plays the character of Mox, a backup quarterback thrust into the starting spot who struggles to juggle his new title of football hero with his love for more intellectual pursuits. And whipped cream bikinis.

my god you played the long game with this one. well done Mox.

Woah. That’s it. Put the entire twitterverse in a box, send it to the Smithsonian, and mark “do not open for 500 years.” When they finally do open it, they’ll read this and know this is how we lived and our society was glorious.

While we’re on the subject…