The Smart Reason Why Jamie Foxx Changed His Name 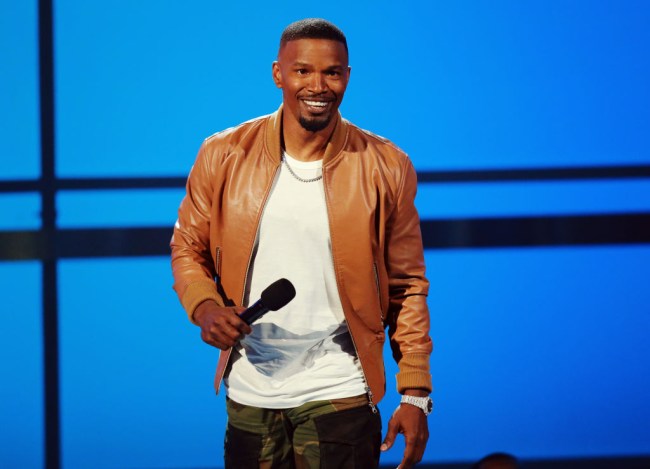 Jamie Foxx is a verified triple-threat of Hollywood actor, singer, and stand-up comedian. But before he was a household name, Jamie Foxx was Eric Marlon Bishop from Terrell, Texas. Eric Bishop changed his birth name to Jamie Foxx for a very shrewd reason when he was first starting out in stand-up comedy.

There’s an interesting story of why Jamie Foxx changed his name, and it wasn’t to have a Hollywood-friendly moniker. When Jamie was an open-mic comic, he was having difficulty getting stage time. Foxx alleges that he killed it on his first few open-mic appearances in 1989. He said that the regular comedians controlled who appeared on the open-mic nights and blacklisted him because he was too funny. After a few great performances, comedians started not allowing him any stage time since it was extremely limited.

Foxx realized that the open-mic nights would have about 100 comedians, but only a handful were female comics. So the regular comedians would put up female comics on stage first. Foxx would write androgynous stage names such as Stacy Brown, Traci Green, and Jamie Foxx to fool whoever was calling up the comedians at the club to make them think they were introducing a female comic.

“Then I went on stage, I got a standing ovation. Because I was “fresh meat,” where they (regular comics) wanted a comedian to die (on stage), the amateur in between all the great ones,” Foxx said during a 2018 interview on The Late Show with Stephen Colbert. “I got a standing ovation, and that’s when Jamie Foxx happened.”

RELATED: Jamie Foxx Is Returning To Stand-Up And Wants To Go On A Comedy Tour With Eddie Murphy

There was one drawback to changing his name to Jamie Foxx, Eric Bishop would forget that he changed his name to “Jamie Foxx” and forgot to respond when people addressed him as “Jamie Foxx.” They thought I was stuck-up because I wasn’t used to the name,” Foxx said. “I was waiting on Eric Marlon Bishop.”

Stephen Colbert posed a hypothetical situation to Jamie, “If in the middle of the night, like at 3 o’clock in the morning, someone wakes you up, slaps you across the face and goes ‘What’s your name?'” Foxx hilariously responded, “It depends on who she is.”

The last name of “Foxx” was a tribute to Jamie’s favorite comedian Redd Foxx. Coincidentally, Redd Foxx also changed his name, and his born name was John Elroy Sanford.

Foxx started getting stage time and was eventually became a huge comedian, opening the door to his television career. By 1991, Jamie was cast to Keenen Ivory Wayans’ In Living Color sketch comedy show on Fox. Ironically, one of Foxx’s most popular characters from In Living Color was “Wanda,” where he pretended to be a woman. By 1996, Foxx got his own WB sitcom The Jamie Foxx Show that ran for five seasons.

Foxx earned his first film role in the 1992 Robin Williams comedy Toys. Jamie, who was a standout quarterback in high school, was cast in Oliver Stone’s 1999 football movie Any Given Sunday. And all of Jamie’s success started with his smart decision to change his name.