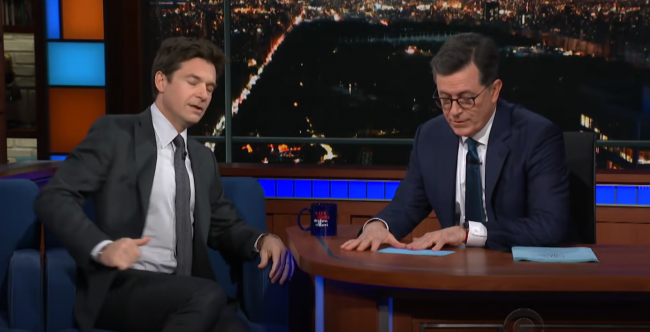 No Primetime Emmy Award or directorial credit can ever wipe the stench off May 23, 2018 for Jason Bateman.

The 52-year-old made an appearance on The Late Show with Stephen Colbert—a program with 3.46 million average viewers—to promote the revival of Arrested Development. Nearly three full years later, the world has finally found out why Bateman was a little “hostile” as a guest, as Colbert said himself on Monday’s appearance on the Smartless podcast.

“In addition to your pleasantness and your wonderful charming nature, there’s something about you that’s a little hostile as a guest,” Colbert admitted. “I can’t imagine I’m the only host that feels this way, but I might be the only one to tell you.”

In Bateman’s defense, he shit himself.

I’ve inserted a Late Show clip from the night in question at the bottom of this article, but I suggest waiting to watch it until you have a full understanding of the insurmountable discomfort Bateman was suffering through.

“Let me explain the hostility the last time I was on your show,” Bateman said.

“I come to do your show. I’m in the dressing room there, which by the way has no bathrooms, at least the dressing room I got…and my little suit’s in there, and everyone gets out of the dressing room so I can change into my suit. I put it on, and my wife likes me wearing stuff that’s a little tight, and I don’t like it, but I guess I lost the battle on this one. So I put it on, it’s a little tight, and I’m thinking, ‘Boy, it could be less tight if I just let a little of this gas out.’ I just came from dinner and things built up a little bit, and if I could just let this one bubble out, things would really work out for me.

And so I release the valve a little bit. Out comes….more than air.

You’re well done with the monologue [at his point], you’re probably in commercial break. It’s time to walk. I haven’t even got the makeup on yet. There’s a makeup artist waiting outside the door for me to get the suit on, so this is a problem. And there’s a knock on the door, she’d like to get the makeup started. Stage manager would like for us to be walking. So now I’ve gotta get the pants off, get the underwear off, and get rid of the underwear in the bathroom that doesn’t exist.

So now I’ve gotta bury the underwear in the trash can, I’ve got to top it with some Kleenex or something.

Suit’s still tight, I’m now in commando, I’m not feeling great about myself. I’ve forgotten all my funny answers that I’ve worked on with the segment producer on the pre-interview.

…I get the makeup on, the powder, I make it out there. And I sit down and we do our interview and that is the reason why I was less than chatty.”

Bateman tells Colbert that he has a British mother who was very sarcastic and dry, so his sense of humor can come off a little “hot.”

Still, watching the first minute of this of clip knowing that Bateman’s undies are stuffed in a trash bin for the intern to pluck out is life imitating art.

Jason, we’ve all been there. At least you didn’t soil yourself in a public square after eating Chipotle. Perspective is key. 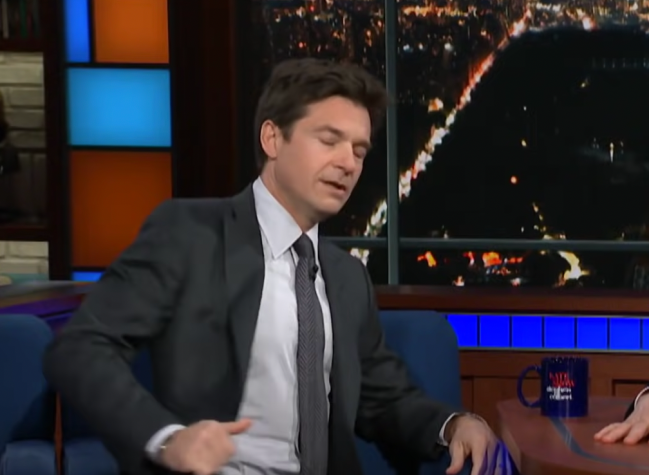