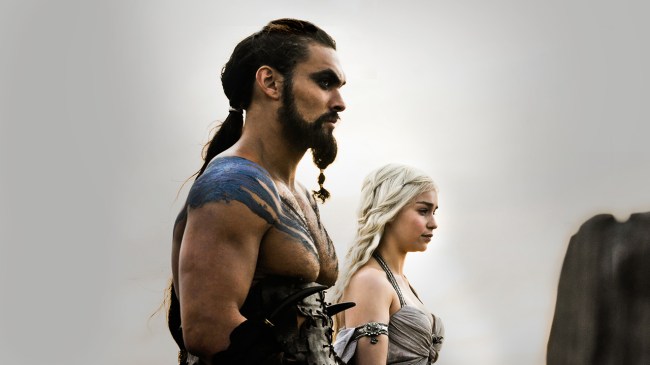 Jason Momoa and Emilia Clarke were husband and wife on Game of Thrones as Khal Drogo and Khaleesi, but were also very close off the set. Despite Jason Momoa’s character getting killed off in Season 1 (at the hands of Khaleesi), the two continued to be friends long after Khal Drogo’s reign as the Dothraki leader. So Momoa did not take Khaleesi’s ending in Game of Thrones well. At all.

Momoa hasn’t been on Game of Thrones since 2012, but the Aquaman actor has kept in touch with Emilia Clarke throughout the years. In 2017, the two GoT actors enjoyed a very drunken reunion.

On May 8th, Clarke posted a throwback photo of herself with Momoa and Tyrion Lannister actor Peter Dinklage.

In April, Momoa posted photos of him partying with Clarke and other Game of Thrones cast members.

It appears that Khal Drogo is still very protective of his Khaleesi. Momoa live-streamed himself watching the Game of Thrones series finale and like many others he did not like it. Khal Drogo witnessed Khaleesi’s new boyfriend Jon Snow not only kiss her but also stab her to death. If that doesn’t scream, “She would have been better if she was still with me” than I don’t know what does.

Momoa’s live-stream video on Instagram while watching Episode 6 of Season 8 featured several F-bombs and multiple growls as one does when watching the destruction of a great TV show in the final episode.

Jason Momoa watching the Game of Thrones finale WAS ALL OF US!! pic.twitter.com/CQaXePLVhj

So basically, Jason Momoa had the exact same reaction as everyone else to the terrible ending to Game of Thrones.

Momoa wrote to Clarke on Instagram in the comments and said: “Baby that episode killed me.” He added several heart eyes emojis and said: “I love you madly.” Lisa Bonet had better keep a close eye on these two.