Maisie Williams Hated Arya’s Ending In ‘Game Of Thrones,’ Would Have Rather Seen Her Character Die 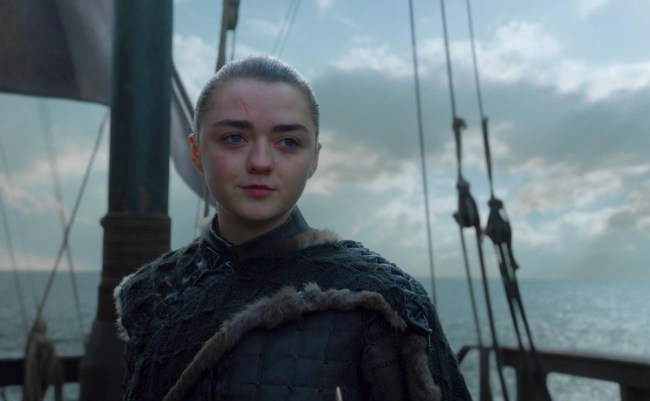 Maisie Williams is not happy with Arya Stark’s “happy ending” in the Game of Thrones finale. Arya sailed off for adventures to find out “what’s west of Westeros” in what she always dreamed of. Maisie hated Arya’s ending and envisioned a different story for the fate of Arya Stark even if it killed the iconic GoT character.

Maisie Williams read the script for the final Game of Thrones season and was as shocked as fans would be at Arya’s actions in the series finale. Williams truly believed that Arya’s entire existence of being in King’s Landing in the final episode was to get revenge and take another villain off her kill list. The scene of Arya Stark using her Faceless Gods skills to morph into Jaime Lannister to assassinate Cersei never happened. Instead, Cersei Lannister was killed by… bricks. Bricks that she could have avoided by moving over five feet.

“I just wanted to be on set with Lena [Headey] again, she’s good fun,” Williams told Entertainment Weekly. “And I wanted Arya to kill Cersei even if it means [Arya] dies too. Even up to the point when Cersei’s with Jaime I thought [while reading the script], ‘He’s going to whip off his face [and reveal its Arya]’ and they’re both going to die. I thought that’s what Arya’s drive has been.”

That would have been a cool ending that utilized the training that Arya Stark had endured for five seasons while eliminating off a person on Arya’s kill list and provide the fitting ending to the villainous Cersei that she deserved. So Arya chickened out of killing one of her deeply-rooted enemies because she got scared. Now remember, this is the same Arya who the episode before bumrushed the biggest baddie in all of Westeros by soaring past thousands of White Walker zombies and a zombie dragon to stab the Night King. Right. But don’t worry, the writers made sure Cersei suffered a poetic death of being buried in three inches of rocks.

“The Hound says, ‘You want to be like me? You want to live your life like me?’” Williams said. “In my head, the answer was: ‘Yeah.’ But I guess sleeping with Gendry, seeing Jon again, realizing she’s not just fighting for herself anymore but also her family — it’s bringing up all these human emotions that Arya hasn’t felt for a long time. When The Hound asks her if she has another option, all of a sudden there are so many more things in [Arya’s] life that she can live for, that she can do.”

“It was a shock for me because that wasn’t how I envisioned her arc going this year,” Maisie explained. “Then I realized there were other things I could play, bringing Arya back to being a 16-year-old again.”

“It’s not a Game of Thrones ending for Arya, it’s a happy ending,” Williams added. “It gave me a place to take Arya that I never thought I’d go with her again.”

“I’m nervous for what comes next and just want to prove myself as an actor and make the most of this series,” Williams continued. “There are not as many opportunities where you get to do everything with one character and this season there’s a whole spectrum I get to do. So whatever happens afterward, I made this count.”