Jeffrey Dean Morgan Shares Some A+ Stories About Tattoos, Harleys, Having Balls, Flipping Off City Slickers And More 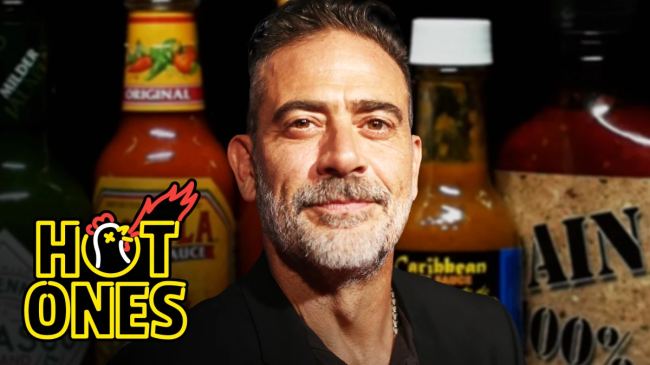 No idea what kind of person Jeffrey Dean Morgan is at home, my guess is he’s pretty decent, but as far acting goes, he’s a complete badass.

From his role as The Comedian in the Zack Snyder-directed film Watchmen to his current role as Negan on The Walking Dead, Morgan is almost always without fail the coolest dude on the screen.

Throw in the fact that he is also now starring in a new horror movie called The Unholy that comes out on April 2nd and he’s definitely one of the guys who is a must-watch when doing an interview.

Even better than an interview, however, is an interview where Morgan has to scarf some seriously hot wings for First We Feast’s “Hot Ones” and you’ve got yourself some must-see footage.

Related: Jeffrey Dean Morgan Once Got So High On Weed Gummies He Bought A Tesla And Didn’t Realize It

“Watching your show I always felt like I could do it,” Morgan tells host Sean Evans at the beginning of the video. “And now that I am looking at these wings in front of me I am suddenly… I feel like I might throw up a little bit.”

During the interview, Morgan and Evans talk about how the actor lives on a 100 acre farm/ranch in upstate New York, taking care of numerous types of animals, and how Morgan can immedately recognize someone from New York City who thought moving up to that area during the pandemic was a good idea, but are clearly out of their element.

Morgan also talks about dealing with coyotes, crows and bobcats on his farmstead, trade secrets about creating a zombie massacre, his obsession with graphic novels – especially Watchmen, playing an iconic villain, his 30-year relationship with TWD co-star Norman Reedus, how Stonehenge is overrated, getting killed off of a show, having a tattoo artist at his wedding, the one acting job that made him want to quit, how Harley Davidson guys have balls and sport bike guys don’t, and much more.

Stick around for when Morgan accidentally bites his tongue mid-way through the Wings of Death and later asks, “Why do people eat this? It’s not enjoyable.” Good stuff.