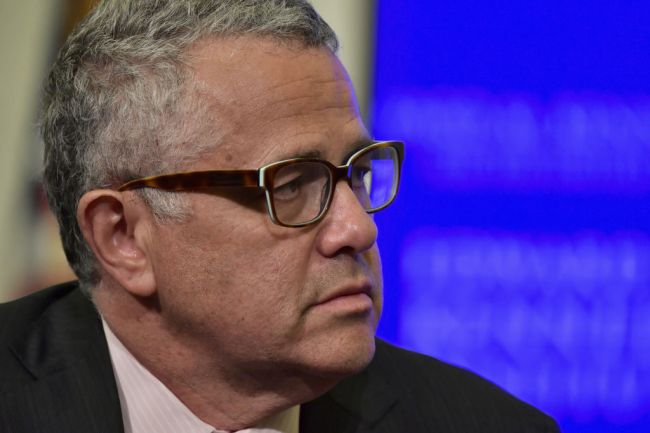 “Both people, who spoke on the condition of anonymity in order to speak freely, noted that it was unclear how much each person saw, but both said that they saw Toobin jerking off,” Vice reported in October. “The people on the call said they could see Toobin touching his penis. Toobin then left the call. Moments later, he called back in, seemingly unaware of what his colleagues had been able to see.”

Tobin, 60, issued an apology last month: “I made an embarrassingly stupid mistake, believing I was off-camera. I apologize to my wife, family, friends and co-workers. I believed I was not visible on Zoom. I thought no one on the Zoom call could see me. I thought I had muted the Zoom video.”

On Wednesday, The New Yorker laid down a stiff punishment and fired Toobin for the reported five-knuckle shuffle incident.

“As a result of our investigation, Jeffrey Toobin is no longer affiliated with the company,” a New Yorker spokeswoman told the New York Post.

“I am writing to share with you that our investigation regarding Jeffrey Toobin is complete, and as a result, he is no longer affiliated with our company,” said Stan Duncan from Conde Nast, the magazine’s parent company. “I want to assure everyone that we take workplace matters seriously. We are committed to fostering an environment where everyone feels respected and upholds our standards of conduct.”

“I was fired today by @NewYorker after 27 years as a Staff Writer,” Toobin wrote on Twitter. “I will always love the magazine, will miss my colleagues, and will look forward to reading their work.”

I was fired today by @NewYorker after 27 years as a Staff Writer. I will always love the magazine, will miss my colleagues, and will look forward to reading their work.

The internet came down hard on Toobin for his unceremonious release with no shortage of double-entendre jokes at the pundit’s expense.

Sad. Sorry for you.

You probably need some Kleenex.

I'm sure new opportunities will arise.

You gotta hold on tight.

Don't let the jerk-offs get you down.

You gotta keep whacking away…

The New Yorker firing Jeffrey Toobin has to be rough on him, because he's spent the past 3 weeks trying to beat off his critics.

rub one out for the homie

What a bunch of jerkoffs https://t.co/rnHmcSYuCD

Must be hard on you.

That sucks. You've erected a legacy. Stand tall and keep your resolve rock hard, and I'm sure you'll be able to rub out the competition to finish first. Don't beat yourself over this–you're a jack of all trades and there are many different strokes for many different folks.

Well after 27 years we know that Jeffery sure could hold his own around his talented colleagues https://t.co/N7n725WpTC

Maybe you can find a job as a handyman. https://t.co/pwGfp0aHUX

Toobin, who also serves as a legal analyst for CNN, has not been terminated by the cable news network. He was placed on leave from CNN, and the network has not yet released a comment on Toobin’s firing.

When Jeffrey Toobin comes back to CNN, it'll be like he never missed a beat.