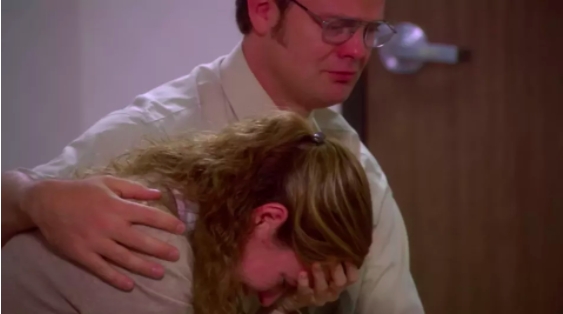 For all the knee slappers, the tummy ticklers, and the hoots-and-hollers The Office has gifted us over its unprecedented nine season run, many of the tender moments have gotten lost in that shuffle.

Like when Jim confessed his love for Pam in the parking lot, but she was already in cahoots with another chap. Or when Jim comforts Dwight in the hallway after Angela betrays him for putting her cat in the freezer. Or when Kevin drops the tub of his prestigious chili.

On the latest episode of the Office Ladies Podcast, former co-stars Jenna Fischer and Angela Kinsey spoke about filming another tear-jerker: the “Back From Vacation” episode when Pam breaks down over Jim and Karen’s relationship. Dwight ultimately finds Pam crying in the hallway and does

“Angela, I watched this scene and it just brought tears to my eyes, because I remember shooting it so clearly,” Fischer said in the podcast, as transcribed by Mashable. “This was like early on in the show, and whenever we had these really emotional scenes like the parking lot scene between Jim and Pam we would just kind of shut down everything. And I remember that we shut down the set and we took hours prepping and shooting this crying scene.”

“It was really important to Greg [Daniels, The Office showrunner] that I really be crying. They did not want to put fake tears in my eyes. He wanted me to really go there,” she explained. “This is a really big challenge for an actor. And so what they did was they made everything really quiet and no one talked to me for about a half hour. I put on the saddest music I could find, and it was sad because it was personal to me… It was music that brought up memories of breakups — music that I listened to at different times in my life when I was having a particularly hard time — so it would bring up a lot of emotions.”

Fischer recalled listening to a Ben Folds song in her crying playlist to advance her to that emotional state for the scene, a divergence from the sad music she played when her and Jim were on the outs.

“I had a whole Pam soundtrack that I would listen to on my drive to work for during season 3 when her and Jim were estranged,” Fischer added. “It was Norah Jones. She’s just so soulful and wishing and a little lost.”

Fischer and Kinsey then praised Rainn Wilson for bringing his own disposition and empathy to Dwight’s character.

“I remember you guys doing this scene, and I remember it from the filter of your BFF. I remember you were really anxious about it. You really wanted to get it right, and you were doing all the prep,” Kinsey said. “And in rewatching it, Jenna, it made me tear up, it’s so beautiful. And I think I see Rainn as Dwight tearing up. But surely Dwight wouldn’t tear up, but I think Rainn, your friend, is tearing up watching you cry.”

“Angela, it’s making me get choked up when you say it, because this is a little bit of a place where the line blurred between the Rainn that you and I know and Dwight,” Fischer replied. “Rainn simply couldn’t do that scene without empathizing with Pam. Every time we did a take he teared up when I cried harder. It was like Rainn Wilson the man was incapable of sitting next to a person in pain without feeling their pain, and this is a thing that we know about Rainn. It’s a thing that we love about Rainn, and when I saw it in the scene it just made me miss Rainn so much, because that’s who Rainn is to me on a personal level.”

“Yeah, I just saw Rainn,” Kinsey said. “I just saw him, and he’s tearing up, and he has to snap back to Dwight and say the line, ‘You’re PMSing pretty hard, right?'” she laughed.

“One of my favorite things he does as Dwight in this scene is he takes his jacket off, and you’re positive he’s going to wrap it around Pam, and he ties it around his own waist so awkwardly,” she continued.

I hope this show lives on far after I’m gone.