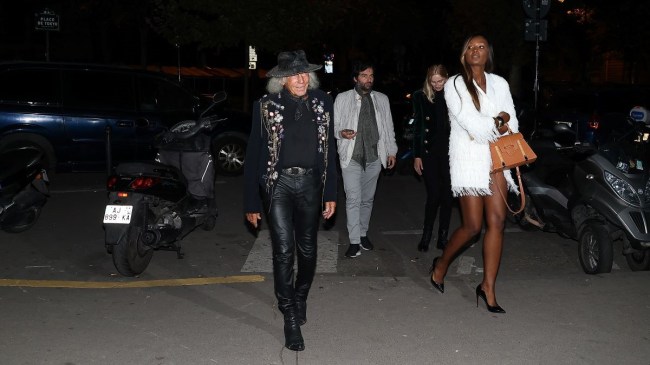 There are few, if any, bigger NBA fans than James Goldstein. There’s a good chance you’ve seen Goldstein at an NBA game. After all, the eccentric uber-rich millionaire has sat courtside at over 2,000 games in his lifetime.

But you very well may not know his name.

That’s because Goldstein, and his incredibly eccentric outfits and famous friends, are very coy about his wealth. In fact, he’s never actually said how he made his fortune. Though enough research will tell you that he got rich on the backs of often poor tenants at a number of mobile home parks he owns throughout the Los Angeles area.

No one knows exactly how much Goldstein is worth, but Celebrity Net Worth places the figure somewhere around the $350 million mark.

Goldstein is ever-present at the biggest games across the country. He’s said in the past his love of the game came from working as a statistician for the Milwaukee (now Atlanta) Hawks at the age of 15.

But he made headlines on Thursday night not for who he was hanging out with, but rather for who he ditched in order to do so.

Goldstein’s house, the Sheats-Goldstein Residence, is one of the most famous in LA if not the world. He’s hosted a number of extravagant parties as well as movie and music video shoots.

On Thursday night, the residence served host to a luxurious, celebrity-filled party that was headlined by a performance by none other than Lady Gaga. But was Goldstein in attendance? Of course not…

"Right now Lady Gaga is performing at my house"

Nothing was going to stop Jimmy Goldstein from catching the Clippers in action tonight! #KiaTipOff22 pic.twitter.com/W50GgC4pbH

Instead, Goldstein told a bemused Paul George, he skipped the party to “see you guys kick the Lakers a**es.” Fans were absolutely floored by the immense power move.

Jimmy Goldstein said Lady Gaga was performing at his house and he was, instead, at a regular season basketball game. I feel like, beyond 'there's a superstar performing at your crib', nobody should be at your crib when you're not there.

Big flex, or the biggest flex?