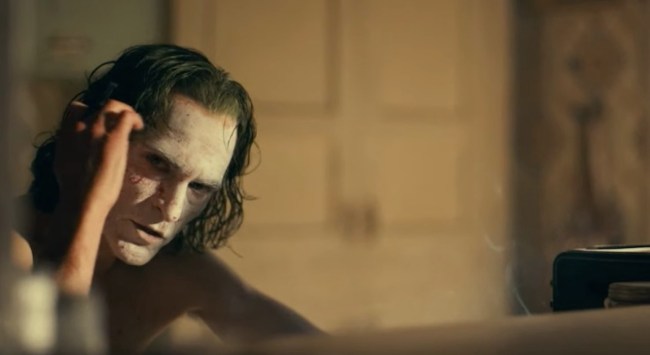 With the release of Joker just mere hours away, anticipation for the film is reaching a fever pitch, as evidenced by the fact that the notoriously private Joaquin Phoenix is out doing the late-night television rounds.

Appearing on Jimmy Kimmel Live! on Tuesday night, Phoenix sat down for an in-depth interview (by late-night TV standards) to talk about losing significant weight to play the Clown Prince of Crime, the nature of movie spoilers, bringing his whole family to the premiere of Joker, his sisters’ reaction to the film, and having a good time making the movie.

And while all that small talk was plenty well and good, it was a moment at the end of the interview that gave fans their best look at the true inner-workings of how Joker came to life.

In an exclusive behind-the-scenes clip, Phoenix can be seen in full Joker make-up acting like, well, the Joker, as he berates a man name Larry (cinematographer Lawrence Sher) for apparently calling him “Cher”, which, truth be told, is a hilarious diss (the clip begins at about 8:10):

“Look, sometimes movies get intense. There’s a lot of people in a small place and you’re trying to find something…but that was supposed to be private,” Phoenix said of the moment.

To be fair to Phoenix — who was clearly very embarrassed by his behavior — this was kind of a bullshit move on Kimmel’s part to take an out of context clip of Phoenix likely in the midst of filming an intense scene for the purpose of a gotcha moment.

Joker hits theaters in the United States on Thursday, October 3.