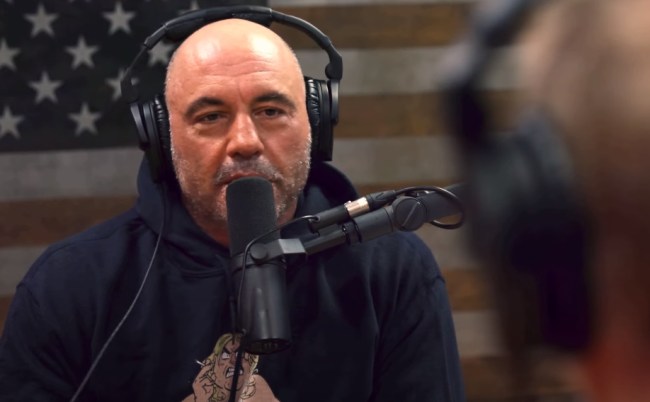 Joe Rogan has enjoyed a successful career as a comedian, podcast host, UFC color commentator, and comedic actor. But before Rogan achieved international fame, he was a stand-up comedian who regularly worked on his craft at The Comedy Store in Hollywood, California. Rogan, a Boston comic, was rising through the ranks of the massively popular comedy club that was managed by Mitzi Shore.

Then one incident caused Rogan to be banned from the iconic comedy club – he called out Carlos Mencia for stealing jokes. And it the brash style of Joe Rogan, he exposed fellow comedian Carlos Mencia in the middle of a stand-up set. A new Showtime documentary highlights the turbulence of Rogan going from a favorite of the Comedy Store to being banned for seven years.

For over 47 years, The Comedy Store has been providing the West Coast with some of the finest comedians on the entire planet. The Comedy Store is unquestionably one of the shrines of humor in North America.

Despite having success as a sitcom star, Rogan’s true passion in the mid-1990s was to be a stand-up comedian like his idols Richard Pryor and Sam Kinison. Rogan honed his craft regularly at The Comedy Store. But fellow comedian Carlos Mencia allegedly kept stealing Rogan’s jokes, as well as other comedians.

After Mencia stole the comedic routines from Rogan and his comedian friends, Rogan decided enough is enough. Rogan confronted Mencia while he was on stage delivering his own stand-up comedy routine.

In the new Showtime documentary remixing over the esteemed history of The Comedy Store, comedians discuss how Mencia stole their comedy routines and how Rogan put an end to the thievery.

Rogan, wearing a Tim Dillon as Megan McCain hoodie, explains how he confronted Mencia over the reported joke theft in 2007 during a live show.

“He’s stealing comedians’ material and doing their closing bits right before he brings them up on stage,” Rogan explains. “When he’s there, we flash the light so that people know he’s in the audience and so you don’t do your best sh*t.”

“Even me, a guy who was on Fear Factor, a guy who was relatively successful, still lost my agent, still got banned from The Comedy Store,” Rogan said. “That’s why people don’t call people out.”

Comedians Bert Kreischer and Whitney Cummings give insight into the Mencia situation.

“The banning of Joe in this club was a genuine f***-up, because he stood for what was good,” Kreischer said.

On previous episodes of The Joe Rogan Experience podcast, Rogan has discussed Mencia stealing his material. Rogan has broached the topic of joke-stealing with his guests such as Bob Saget and

“I was angry,” Rogan said. “I put all that time into that place, and that Mencia thing — I thought we were doing the right thing. I thought that was a real problem.”

“I don’t have any hate for that dude,” Rogan told Saget. “And I hope he’s doing great, I really do.”

Rogan also addressed the Mencia situation in a JRE episode with Mary Lynn Rajskub, a comedian who is most notable for being “Gail the Snail” from It’s Always Sunny in Philadelphia.

“At this point, when you took the road I took, you have to commit to it,” Mencia said. “A really good friend of mine said I should call Joe and make up because he has got a really good podcast. And I said, ‘What am I supposed to say to someone who accused me of stealing jokes, but not his, and he’s the one who’s tried to ruin my career?’ I never tried to ruin his career. I don’t know how to address that.”

During a Joe Rogan Experience episode with Ron White in September, Rogan talked about starting his own comedy club in Austin, Texas, where he recently moved to.