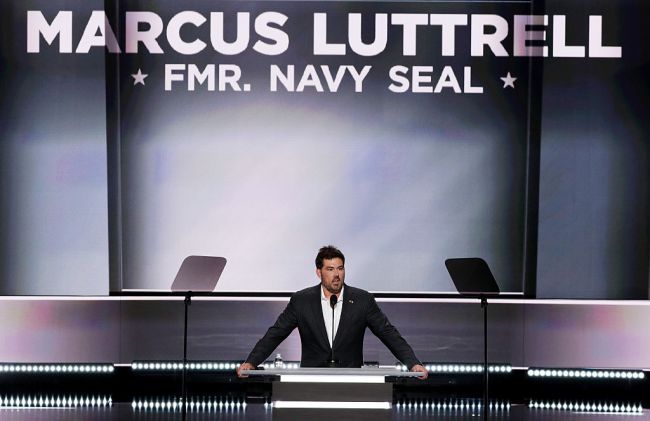 Joe Rogan interviews are synonymous for lasting well over three hours until every single nook and cranny has been revealed or until he asks his guests if they ever ate elk meat while high on psilocybin mushrooms. However, a recent Joe Rogan Experience interview ended abruptly, which caused fans to scratch their heads and ask why.

Former Navy SEAL Marcus Luttrell, whose incredible story was the inspiration for Lone Survivor, appeared on The Joe Rogan Experience. Luttrell was (SPOILER ALERT) the one and only survivor of OperationsRed Wings in Afghanistan, a mission in 2005 where SEAL Team 10 were assigned to neutralize a high-ranking Taliban leader. However, the Navy SEALs were engaged in a bloody gun battle with Taliban fighters on the side of a mountain that lasted hours. Miraculously, Luttrell survived the firefight that left his fellow SEALs dead, and was rescued when he was near the end of his rope.

In the interview, Luttrell fights back tears as he relives the personal hell that he experienced and the kindness of an Afghan tribe that enabled him to live for six days until his rescue by U.S. armed forces.

Despite suffering major injuries from the battle in Afghanistan, Luttrell would volunteer for another military tour before being medically retired.

Luttrell wrote the book Lone Survivor detailing his unbelievable story, which was made into a Hollywood movie featuring actor Mark Wahlberg. During his recent interview with Joe Rogan, Luttrell revealed that he hadn’t actually seen the entire movie based on his near-death experience in the Middle East.

Rogan asked the Navy SEAL, “What is it like to have a movie about one of the worst experiences of your life?”

“It’s an honor to be a part of that,” Luttrell responded. “Man, it’s about me getting my ass whipped. As a fighter and a warrior, those are usually the stories you don’t want out.”

“I haven’t seen it,” the war hero said of Lone Survivor, the movie about the most critical moment of his life, then joked, “I’ve never watched it all the way through, I know the director’s cut.”

RELATED: Joe Rogan Fires Back At Critics Who Tried To Get Him Canceled, Spotify Reportedly Defends Alex Jones Episode

“I’m glad you said, ‘Let’s start it off with whiskey,'” Rogan told Luttrell. “As soon as you said that, I’m like, ‘This is gonna go great.'”

“I only drink whiskey with my friends, and the only reason we say that is because the things that come out when you drink whiskey,” Luttrell said. “So I’ve been looking forward to this, we’ve been friends for a while, I thought, ‘We should have a good time with it.'”

Apparently, Luttrell enjoyed a little too much whiskey during the interview.

Later in the interview, Luttrell needed to use the bathroom, which happens to most guests during Rogan’s marathon interviews. However, Luttrell never returned. JRE fans were curious as to why the interview ended so abruptly.

Rogan explained what happened to the ending of the Luttrell interview.

“A real honor and a hell of a good time to share a podcast with a great man and a real hero,” Rogan wrote on an Instagram post. “We could all use someone like @marcusluttrell in our lives.”

“You know you’re a bad mf’er when @markwahlberg plays you in a movie,” the UFC commentator added. “If you don’t know who Marcus is, he’s the real life SEAL that was the subject of the incredible movie Lone Survivor.”

“We talked a lot of s*** and drank a lot of whiskey,” Rogan explained. “For people wondering why the podcast cut off abruptly after Marcus went to take a leak we decided that perhaps he had consumed a little too much to continue talking, and in retrospect, I believe that was the correct decision. Hahahaha! We’ll do it again, I’m sure. I enjoyed the f*** out of it, and I hope you do too.”

RELATED: Joe Rogan And Other Comedians Reflect On Carlos Mencia As Joke-Stealer In ‘Comedy Store’ Documentary