Joey Chestnut Reveals What Happens To His Body When He Devours 76 Hot Dogs: ‘It’s Hard On The Body’ 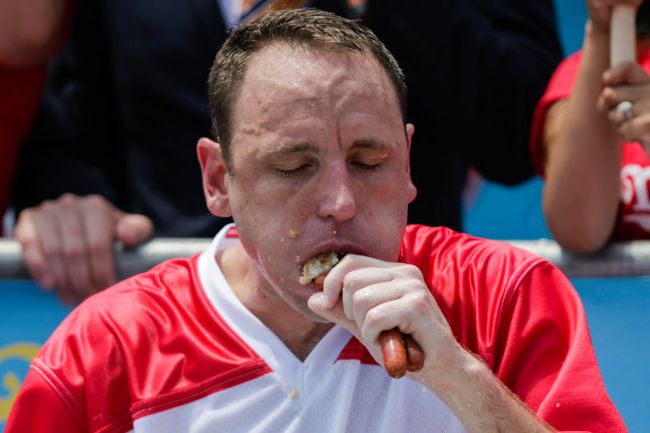 Have you ever asked the question, “What happens to your body when you eat 76 hot dogs?” Luckily for you, Joey Chestnut has answered that very specific question so you don’t have to devour 76 weiners.

The legendary competitive eater explained to Insider what happens to his body when he eats 76 hot dogs.

“Most people relate to feeling really bloated and tired after Thanksgiving,” Chestnut said. “It’s kind of like that, except really, really bad.”

Chestnut told Insider that immediately after competing in Nathan’s Hot Dog Eating Contest he begins “sweating like a madman,” and that his sweat smells like hot dogs and is “sticky and greasy.”

“Afterward, I’m crazy exhausted,” Joey Chestnut said. “And usually my first thing is either I’m thirsty or I want to go to sleep. I usually take a nap as soon as I can.”

“It’s natural,” Chestnut noted. “If you eat a lot of food, you’re going to go to the bathroom.”

RELATED: Joey Chestnut Inhaling A 12-Pound Walking Taco In One Sitting Is A Threat To Toilets Everywhere

Chestnut reveals it takes two full days for him “to really start to feel normal again.”

“It’s hard on the body, there’s no way around it,” the competitive eater said.

Before the Nathan’s Hot Dog Eating Contest, Chestnut heads into the competition with an empty stomach by doing a two-day cleanse of only water and lemon juice.

“My body knows that it’s going to be digesting a massive amount of food really quickly, so I make sure it’s easy to digest,” he said. “Most people, when you eat food, it takes nine to 10 hours to really digest it. After I do a cleanse, things are moving quick.”

RELATED: Scientists, Doing God’s Work, Have Finally Calculated How Many Hot Dogs A Person Can Eat