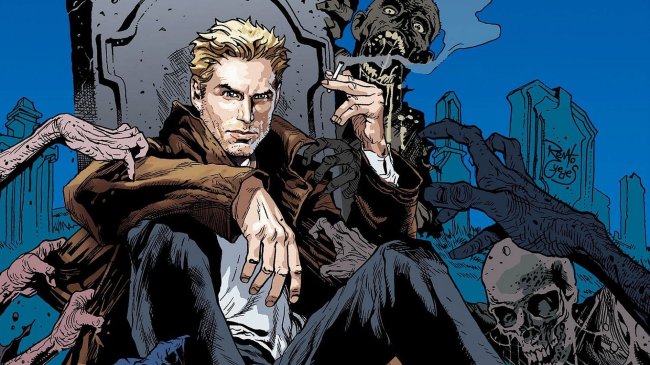 Previously portrayed by Keanu Reeves in a truly elite so-bad-it’s-good film (in fact, Constantine may even quietly qualify as being *good good*) and English actor Matt Ryan in the short-lived NBC series, the John Constantine character is on the verge of another comeback, as reports indicate a series is in the works at HBO Max, with JJ Abrams’ Bad Robot involved in the production.

HBO Max is working with JJ Abrams’ Bad Robot Productions company to make a new series centered around the DC hero Constantine. The logline describes the show as a darker reinvention of the character, that will be different from any previous project based on the character. It will be less focused on religion, and more focused on the horror elements from the Constantine comics.

The production is currently searching for an actor for the lead role, with the hopes of casting a BIPOC actor in their late 20’s, similar to a young Riz Ahmed. The show will also be written by Guy Bolton. [via The Illuminerdi]

Obviously, other than news of the series itself, the portion of the report that’s caught the eyes of fans is the BIPOC tidbit, which has naturally divided those always-cool-heads on Twitter.

As far as my personal opinion, I think a character’s ethnicity should only have to remain comic book accurate if it forms the foundation of their character. For example, the entire basis of the Erik Lehnsherr character (a.k.a. Magneto) is that he’s a Holocaust survivor. That cannot be changed as it would therefore fundamentally change the very nature of the character, which is that of a white Jewish guy who lived through Nazi Germany.

Conversely, if they wanted to cast Michael B. Jordan as Superman (which was rumored for quite some time), I could not give a shit less. He’s literally an alien, you mean to tell me that Kal-El has to be a square-jawed white guy with a slick back? I’m not buying it. There is nothing about either Superman or — perhaps more importantly — Clark Kent that suggests he needs to maintain his comic book look in order to be properly portrayed. Adding racial tension to the Clark Kent tale could perhaps even make for a more compelling story. Everything about Kal-El’s origin remains exactly the same if he’s played by a POC actor, and I’d reason the same can be said about John Constantine. He was born in Liverpool and he fights demons — Riz Ahmed, who was name-checked in the original report, would crush a role like that. I just watched Daniel Kaluuya put forth an Oscar-worth performance in Judas and the Black Messiah, give the role to him if he’ll take it. Lest we forget that Wolverine is actually about 5’3″ in the comics and the foot-taller Hugh Jackman did just fine.