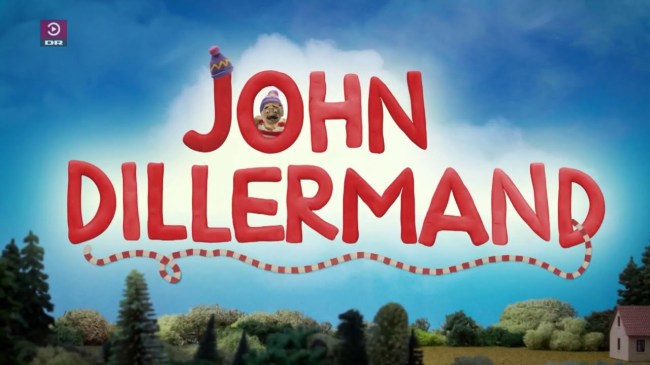 John Dillermand, a new childrens’s show airing in Denmark about a man with a giant, misbehaving willy, is catching some heat. Hard to believe, I know. Apparently, the word dillermand is slang for penis over there, somehow making this even worse.

The claymation series revolves around the show’s hero John Dillermand who uses his giant member to save the day, when it isn’t snaking around with a mind of it’s own and getting into trouble – something that seems to happen quite often.

That’s right. When John’s willy isn’t stealing ice cream, grabbing guns and waving them around wildly, or almost getting cut off by a neighbor with hedge clippers, John’s diller (their shortened version of the word – they also call it a craze) helps out with rescues, serves as a fishing rod (not kidding), and performs as a helicopter – or diller-copter as one episode’s description states.

The show even has a killer theme song that goes, “Hello I am John Johnson / he has the world’s longest johnson / there’s almost nothing he can’t do with it / he can swing it around / he can get a bit embarrassed / he could save the whole world if only he had the chance.”

According to the show’s producers, DR TV, “We think it’s important to be able to tell stories about bodies. In the series, we recognise (young children’s) growing curiosity about their bodies and genitals, as well as embarrassment and pleasure in the body.”

Check out a couple of the show’s episode descriptions…

Imagine if you had the world’s longest craze! John has it. It often gets him in trouble and it can get really embarrassing, but when he stands by the fact that he is different, he can save children, babies and cars and even hoist the flag – with the diller. In fact, he can save the whole world if only he were allowed to.

John gets a gun from Oldemor, and is asked to go out and shoot their dinner – preferably a pheasant. The world’s longest diller and a rifle are doomed to go wrong, and funny enough, John also comes home with a pizza and a shot of diller.

Needless to say, reactions to John Dillermand have been rather mixed.

Here is #JohnDillermand trying to light a barbecue with his exceptionally long penis! More info below: https://t.co/axb9CQIj8H pic.twitter.com/k0naL0SA6Q

The World have COVID-19, and Denmark now have #johndillermand😷 pic.twitter.com/ZSI2Yd7RnC

Today on Only in Denmark, an animated children's show about a man with the longest willy the world which he can't control. Here he is making soap bubbles with it 🤷 #JohnDillermand pic.twitter.com/ISaMvC0lcP

#JohnDillermand For the next smash brothers DLC @NintendoAmerica #NintendoSwitch

Danish kids making #JohnDillermand snowmen with what little snow we got this year pic.twitter.com/Hb5bjxGbf6