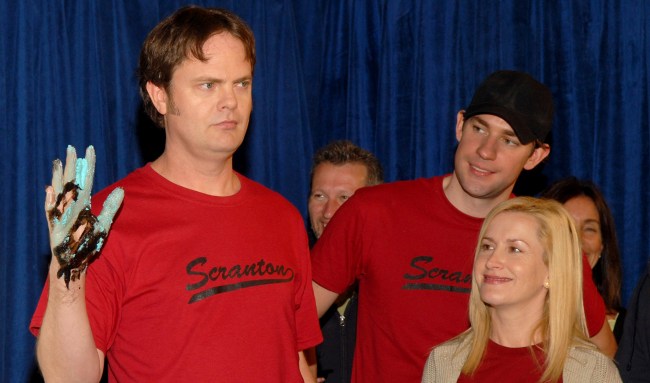 After losing the slightest bit of his lovableness with fans when he sold Some Good News to CBS, John Krasinski made a nice rebound this week when he joined his former co-star on The Office, Rainn Wilson, for his weekly Hey There, Human Instagram Live session.

During Krasinski and Wilson’s very entertaining discussion, they hit on numerous topics including the aforementioned sale of Some Good News, as well as what they’ve been doing to keep busy during self-isolation.

The best part of their conversation, of course, revolved around their time together doing The Office.

“Personally, I think it’s best thing I’ll ever do in my career,” Krasinski revealed to Wilson. “Everybody always says, ‘At the end of the day, what if you’re only know for Jim Halpert?’ I was like, ‘Are you kidding me? That would be the greatest thing ever.’ I remember Steve [Carell], one day he was like, ‘You guys know that no matter what we do—we could go to space—and this will always be the thing we’re known for,’ and how lucky we are that that’s the case.”

Wilson agreed and shared his own similar memory, “[Carell] said that in the first season when we went out to lunch. And that always stuck in my head. He had that premonition, this could be the thing that defines us.”

There sure have been a lot of reunions with the cast of The Office lately what with Krasinski, who has gone on record saying he’d be down for a show reunion, getting Steve Carrell to do an interview with him and then getting the entire gang back together (virtually) to surprise a couple who were getting married.

Can you imagine what the ratings would be if they ever got The Office cast back together to make some new episodes? It’d make The Last Dance’s viewership look like hot garbage.