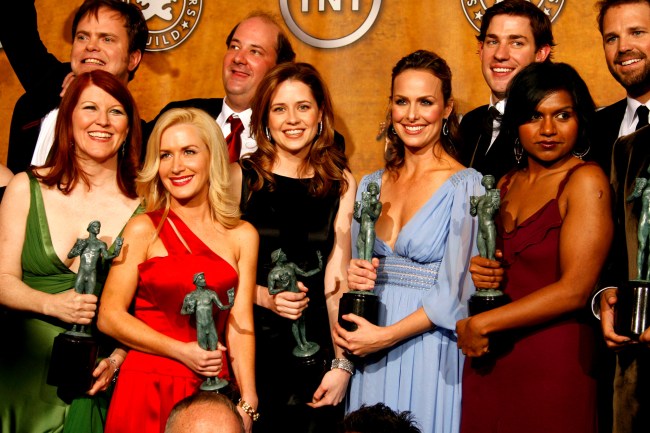 As anyone who is a fan of the show knows, nine seasons of The Office was just simply not enough. Almost no one got to the end of episode number 201 and thought to themself, “Phew. Glad that’s over.”

Sure, the cast had other things they wanted to do, and many of them like Steve Carrell, Mindy Kaling, Ellie Kemper, and John Krasinski have gone on to great success in other ventures.

We’ve even had a few bonus Pam and Jim moments like when John’s Bruins took on Jenna Fischer’s Blues in the Stanley Cup (Roy even got involved), and when the two of them disagreed on when Pam and Jim’s first kiss took place.

Jenna Fischer and her BFF IRL Angela Kinsey even started a Office podcast.

But while we get prepared to mourn The Office leaving Netflix, and NBC is reportedly having “conversations” to bring back The Office for its new streaming service Peacock, we have to wonder, would anyone from the main cast even be interested in getting the band back together?

According to John Krasinski in a new interview with Esquire, he would be more than down to see his old co-workers at Dunder Mifflin.

“The Office was absolutely everything to me,” Krasinski said. “I mean, it is my beginning and my end. I’m pretty sure at the end of my career I’ll still be known for Jim. That was my first experience with Hollywood. It was the first creative family I’ve ever had. In many ways, they will always be the most important people in that most important experience in my career. So yeah, if they did a reunion, I would absolutely love to do it.”

So that makes at least three people who are game including Angela Kinsey and Ellie Kemper, even if Jenna Fischer and Steve Carrell have said they would pass.

“I would not do an Office reboot,” Fischer said on Ellen last December. “But I would love to do a reunion special episode. I’d like to get us all together again.”

“I would do anything they called me to do,” Kinsey replied. “So if you want to call me, I’m around.”

“I’m with you, Angela!” agreed Kemper. “I will be there. So Angela and I are rebooting The Office!”

It is my hope and goal that we do an Office reboot,” NBCU’s Bonnie Hammer, Chairman of Direct-to-Consumer and Digital Enterprises, told Deadline in September.

She’s not the only one.