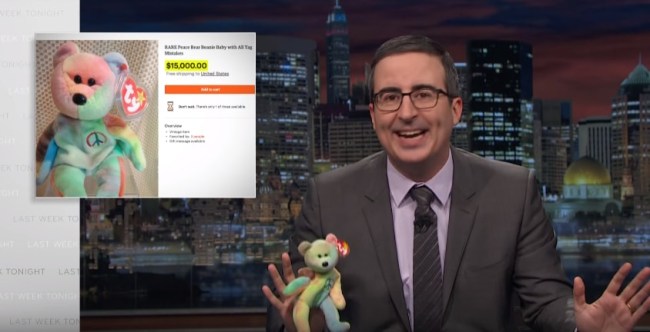 Oliver spotlighted several REAL cryptocurrencies such as Trumpcoin, Jesuscoin, Titcoin, and Dogecoin, which was created as a joke to mock the popular meme about a Shiba Inu dog, but it ended up being taken as an actual currency and now has an unbelievable market cap of $460,613,637. To explain Bitcoin, he also played the “HODL GANG” rap music video. “Hodl” is cryptocurrency slang for “hold on to” and don’t sell even if the digital currency is crashing.

Oliver tried to explain cryptocurrencies by showcasing several vocal proponents the digital currencies such as “Dan,” the fictional dude at your office who won’t shut up about Bitcoin; Don Tapscott, a business executive who compared Blockchain to transforming a Chicken McNugget back into a live chicken; and Brock Pierce, who was a child actor on The Mighty Ducks and is now a crypto-entrepreneur and spokesperson for BlockOne, which raised $1.5 billion for a new software called Eos. In case you were doubting ever investing with a child actor who was in a 1995 Gushers commercial (Brock is the one who turned into a banana), Pierce recently held his wedding at Burning man where it was unicorn-themed.

Then there was Carlos Matos, a very boisterous supporter of BitConnect, a now-defunct crypto scheme. Keegan-Michael Key joined the show and parodied Matos for an exuberant presentation about a crazy new idea — “responsibility.”

We’ll leave you with the catchy “HODL GANG” track by Chris Record.