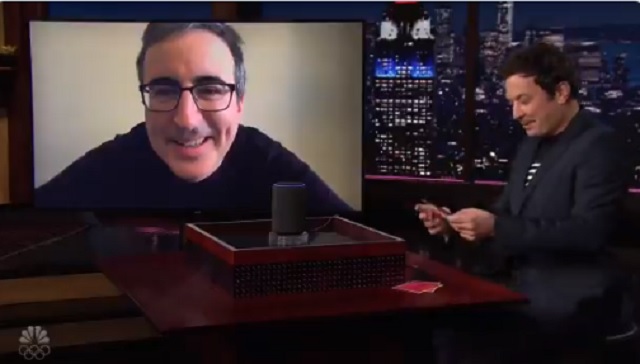 HBO’s John Oliver is too real for the Tonight Show with Jimmy Fallon.

On Thursday night, Oliver came on the show to play a game called “Hey Robot” which features an Amazon Echo device and is clearly a product placement sponsorship between Fallon and Amazon.

During the game, Oliver straight-up asks the Echo’s virtual assistant Alexa about Amazon’s working conditions, which have been the subject of controversy. Before Alexa could answer a panicked Fallon stepped in stopped Alexa from answering.

John oliver just asked Alexa/Echo on live NBC "how bad are amazon working conditions?" and Fallon was like STOP ALEXA

Fallon was NOT going to let an answer come out of this thing pic.twitter.com/Fu9wNfOWIa

For what it’s worth Oliver has spoken about Amazon’s working conditions in great detail on his show “Last Week Tonight.”