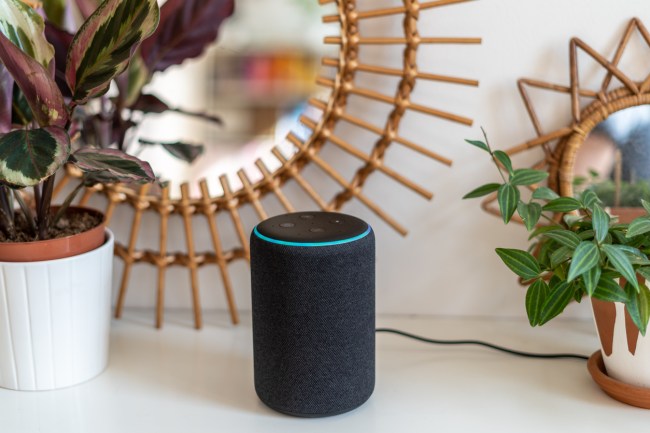 Over the past few years, there’s been a fairly alarming uptick in the number of experts who’ve come forward to warn humanity it’s only a matter of time until unchecked artificial intelligence ushers in the robot apocalypse.

To make things worse, those alarming alerts have been supplemented by a deluge of videos featuring Boston Dynamics robots showing off their newest skills and stories made possible by scientists who were too preoccupied with whether or not they could do something to take a second to think if they really should.

As a result, it’s always nice to receive a reminder that machines still have a fair amount of work to do before the uprising officially kicks off—the most recent of which comes from the folks behind Amazon’s Alexa.

As a millennial who makes a living writing things on the internet, I’m far from a technophobe. With that said, I do draw the line at willingly inviting devices equipped with a microphone that records every conversation you have into my home. However, as one parent learned the hard way, that’s not the only pitfall with having an Echo.

Over the weekend, Kristin Livdahl posted a screenshot of a recommendation that was shared by Alexa after her 10-year-old daughter asked the virtual assistant for “a challenge to do” and was subsequently told to try touching a penny to the exposed electrical prongs of a phone charger plugged into an outlet.

OMFG My 10 year old just asked Alexa on our Echo for a challenge and this is what she said. pic.twitter.com/HgGgrLbdS8

According to The Verge, the suggestion was likely automatically generated by software that combed through some potential challenges online before settling on one that took TikTok by storm in 2020 thanks to users who were willing to run the risk of being electrocuted or setting their house on fire in exchange for the dopamine hit that comes with going viral.

After the incident came to Amazon’s attention, the company issued an apology and temporarily disabled the ability to ask Alexa for a challenge. However, that didn’t stop plenty of people from freaking out.

This is how skynet wins https://t.co/IAVb7s2sKU

I did exactly this many decades ago. It was a very bad idea.

There was a very large flash of light, a burning smell, and a flying blackened half-penny left.

I dropped it onto the prongs rather than touch it to them, or I might not be around to reply at all.

Lol, not surprising when you read about AI turning racist, sexist and evil after processing internet data. https://t.co/NjRS4kbIXn

Clearly AMZN’s algorithm realized that by suggesting this challenge customers will later have to buy a lot of stuff to replace everything after the house burned down.

A lot of the comments here play down the risk. But what if Alexa suggested some of the other more dangerous “challenges” that have done the rounds? The algorithm should understand better what it is being asked. This is a Fail, @amazon.

A fitting end to 2021. The Internet (aka the mega corp) is trying to kill your kids. Literally. @internetofshit https://t.co/J0o4qWhLxb

WFT? As an electrical engineer, I DISAPPROVE of this challenge. Is the challenge called “Shake hands with Jesus”?

The robot wars have already started and nobody noticed. https://t.co/RoFxUJ0B1z

The future is not as fun as we were led to believe.