Johnny Manziel Said He Wanted To Go Back To College After Arriving In Cleveland, Discusses His Current Mental State 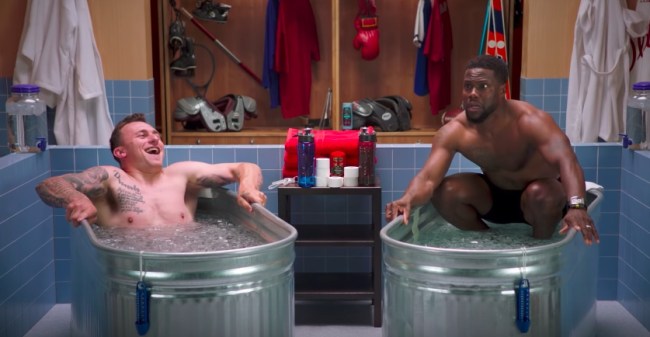 Now 25 year old in the history of 25 year olds has experienced more public ups and downs than Johnny Manziel. Manziel became the first freshman to ever win the Heisman Trophy before getting drafted by the Cleveland Browns in the first round of the 2014 NFL draft. Two years later, addiction and mental health issues drove him out of the league and in a very public state of self-reflection.

Today, Manziel is in football purgatory, fighting for a QB1 slot for the Montreal Alouettes of the Canadian Football League in what is being dubbed his Comeback SZN.

In this week’s episode of Cold As Balls from Kevin Hart’s Laugh Out Loud network, Johnny dips into an ice bath with the comedian to discuss everything from his off-the-field struggles to his current mental state. He also farts in the tub.

Check out the video below.

3:10 mark: Manziel reveals that he almost quit during his freshman year at Texas A&M to pursue baseball, his first true love.

4:35 mark: Johnny describes how everything changed for him after Texas A&M beat number 1 ranked Alabama in August 2012. Manziel, who was a freshman at the time, completed 24 of 31 passes for 253 passing yards and two passing touchdowns with 92 rushing yards in the 29-24 win.

5:30 mark: Manziel talks about he became too enamored by the fame and celebrity attention he received.

7:35 mark: Johnny talks about how it felt to get drafted by the lowly Cleveland Browns and how the rude awakening of NFL rigors bled into other facets of his life.

“If I’m not doing good at what I love, how can I go home and be happy about other things….I was finding different ways to hide and get out of who I am because I don’t like who I am.”