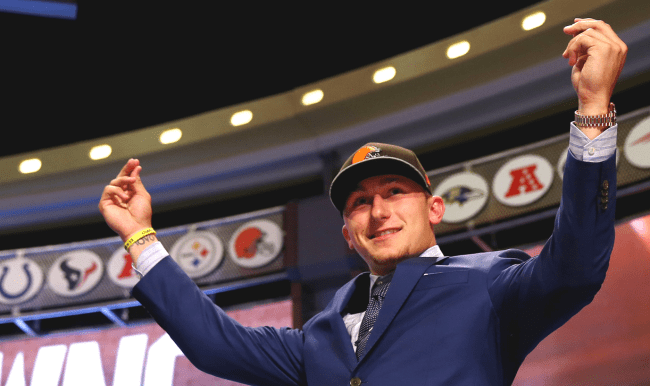 Life goal: Find yourself someone who loves you as much as Jon Gruden loved Johnny Manziel during the 2014 NFL Draft.

As every football fan will recall, going into the 2014 NFL Draft there was much speculation about when and to which team Johnny Football would be drafted.

The slender six-foot tall Manziel, while outrageously successful at Texas A&M during his two seasons there, was a major question mark. Would his skills translate to the NFL level? Was he too small? Were there too many red flags regarding his character?

It was those numbers and his many highlight reel plays for the Aggies that had then ESPN football analyst Jon Gruden frothing at the mouth just thinking about the prospect of selecting Manziel in the draft in 2014.

“Johnny Football will bring a buzz to Houston!” Gruden shouted at Ray Lewis during the draft coverage. “And that buzz is good! I’ll buy two tickets if he goes to Houston!

“If I’m a quarterback coach, this is what I want to mold for my future in the modern day NFL!”

Of course, Manziel didn’t go to Houston, but that didn’t stop Gruden from loudly carrying his torch for Johnny Football.

Compilation of Jon Gruden pushing hard for Johnny Manziel during the whole 2014 first round. pic.twitter.com/fkLxY15M0z

Manziel, as we are all well aware, ended up being drafted by the Cleveland Browns with the 22nd pick in the first round of the 2014 draft, played in 14 games, starting eight, and was off to the Hamilton Tiger-Cats, Montreal Alouettes, Memphis Express, and the Fan Controlled Football League Zappers, before deciding to hang him cleats up for good and become a professional golfer.

Gruden, on the other hand, left ESPN and signed a 10-year, $100 million contract to become the head coach of the Raiders for the second time after nine years away from coaching, racking up a 19-29 record in his first three years back.

The moral of the story? They’re both bad at NFLing.