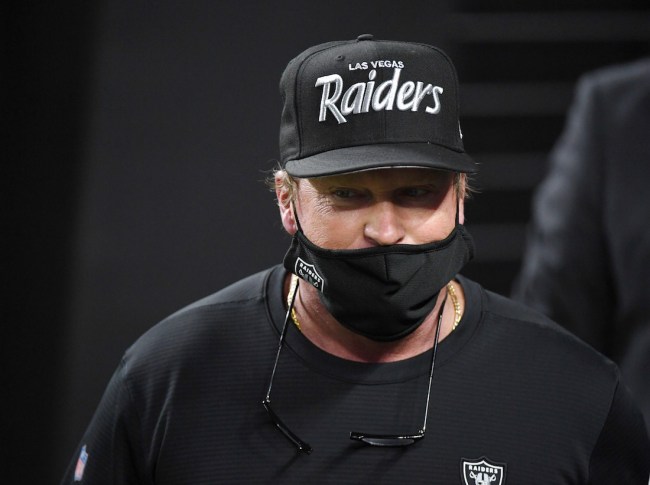 You’ve got to love how Raiders head coach Jon Gruden just seems to march to his own beat. Whether it’s putting his own spin on the whole mask policy the NFL instilled this season to protect at-risk people from COVID-19, to speaking his mind about whatever pops into his head, Gruden seems to bend the rules as much as he possibly can.

While wearing a mask that looks like a thong is one thing — and it cost the Las Vegas Raiders’ organization a lot of money — Gruden took things to a different level during a recent interview with NBC’s Cris Collinsworth, as the head coach went all in and ignored the NFL tampering rules by pitching soon-to-be free agent Richard Sherman.

Collinsworth hosts a podcast with Sherman, and the two recently had the Raiders coach on as a guest. Even after the host warned Jon Gruden about the potential of breaking NFL tampering rules, the dude straight up didn’t care, and decided to recruit the future Hall of Fame cornerback anyways. Take a look at the exchange below.

Collinsworth mentioned the fact that former Seahawks defensive coordinator Gus Bradley has arrived in Las Vegas as the defensive coordinator, before pointing out the elephant that enters the room when a player under contract with one team is speaking directly to a coach from another team.

“I know there’s tampering rules out there and I don’t want to bring up anything that might create a problem for you, because I know that you’ve been fined a few shekels over the years,” Collinsworth said.

“Yes I have,” Gruden said. “I’ve been fined, I’ve been punished very, very harshly. Richard Sherman, if you are a free agent, which there is a rumor you are, we are looking for an alpha presence in our secondary. Somebody that could play this Hawk 3-press technique with the read step. If you’re available and interested, maybe you and I can get together at some point off air.”

Said Sherman in response: “There’s a conversation to be had, for sure. I am free and available these days.”

This is honestly a glorious “F you” to the league’s system, and Jon Gruden literally didn’t give a damn about any potential consequences. That’s some iron balls on the table sort of stuff, and, if it ends up working out and the team gets Richard Sherman — even if there is a fine to be paid for breaking NFL tampering rules — I’m sure the coach and the Raiders won’t be too upset about it.

That said, Gruden’s little maneuver is pissing off some other front office folks around the league. According to the Pro Football Talk article, at least one GM responded by saying “this is blatant tampering.” He’s not wrong, based off of the specific language written in the rule.

From page 5 of the NFL’s Anti-Tampering Policy: “Any public or private statement of interest, qualified or unqualified, in another club’s player to that player’s agent or representative, or to a member of the news media, is a violation of this Anti-Tampering Policy. (Example of a prohibited comment: ‘He’s an excellent player, and we’d very much like to have him if he were available, but another club holds his rights.’)”

You know who doesn’t give a damn about page 5 of the NFL Tampering Rule? Jon Gruden, who continues to play by his own rules if it means he and his Las Vegas Raiders get some sort of an advantage.