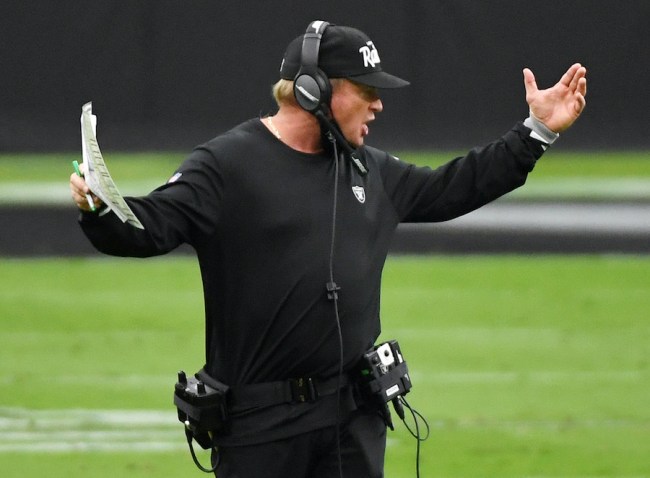 Jon Gruden and the Las Vegas Raiders haven’t taken the NFL and their Covid-19 protocols very seriously this year.

Players attended a charity event early in the season without masks on, Gruden was fined by the league for a mask infraction in week two, wore a pair of “panties” the following week, and still didn’t care about keeping his mask on a week later.

It looks like the team’s lackadaisical attitude is coming back to bite them on the butt.

With his entire offensive line off all week, Gruden assumed the game against the Buccaneers would be moved to Monday or Tuesday.

Per a league source, Gruden is “livid” that the game wasn’t postponed to Monday or Tuesday night, in order to give him a chance to get ready for the game those offensive linemen who were sent home for most of the week due to enhanced COVID-19 protocols that automatically knock out other healthy players based on the official results (more on that in a bit) of contact tracing.

The Raiders, who were off last week, had the offensive linemen present for a Monday practice, but they weren’t cleared to return until Saturday, missing the most important practice days of the week.

They won’t be as ready for Sunday’s showdown with the Tampa Bay defense as they could have been.

Gruden believes the game should have been bumped to Monday or Tuesday night, giving him more time to get his linemen ready.

The Buccaneers play next Monday night against the Giants, reducing the inconvenience to Tampa Bay.

The league, as always, doesn’t really give a crap.

“As we’ve said since before the beginning of the season, we always try to play games as close to their scheduled time, date and location while keeping the health and safety of players and personnel as the foremost priority.

There have been no additional positive tests among the Raiders who were able to keep their facility open and practice as a team. Roster flexibility is also in place with an increased number of practice squad players availability (16) and the ability to move them to [the] active [roster] as necessary.

The Raiders close contacts are eligible to play today.

Teams and players understand that strict adherence to the protocols is necessary to avoid outbreaks and disruptions of their schedule and season.”

Sorry, John. The game must go on.