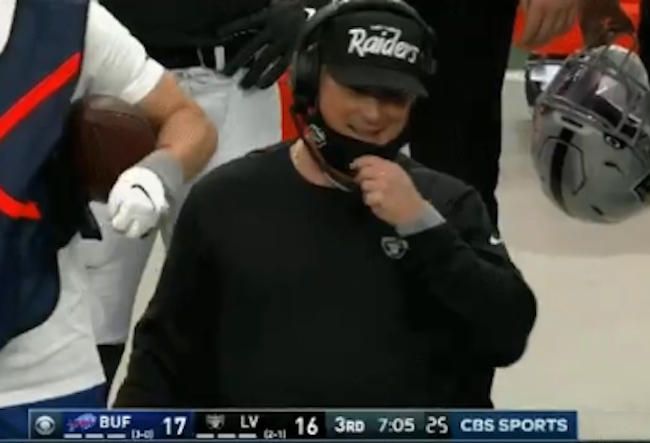 Jon Gruden just doesn’t give a crap about wearing a mask, even though the league warned of suspensions and losing drafts picks for repeated offenses.

Last week, Gruden showed up on the sideline with a pair of panties on his face.

This week, he’s wearing a proper mask, but the protective covering didn’t cover his face much during today’s game against the Buffalo Bills.

The Las Vegas Raiders coach was caught on camera several times during Sunday’s game with his mask around his chin. Gruden seemed to fix his mask someone in the headset told the coach he was on camera.

Is Jon Gruden even going to take a salary this year after all the mask fines? pic.twitter.com/N8MSHqshPZ

Gruden putting the mask up so he doesn't get fined. pic.twitter.com/qZCiLdK9by

Gruden has already been fined $100,000 for mask violations this season and the Raiders were fined for breaking locker room rules and appearing at a charity event.

The team will most likely be hearing from the league on Monday morning.