Johnny Manziel Says Getting Arrested Helped Him Win Heisman, Mixes It Up With Twitter Trolls 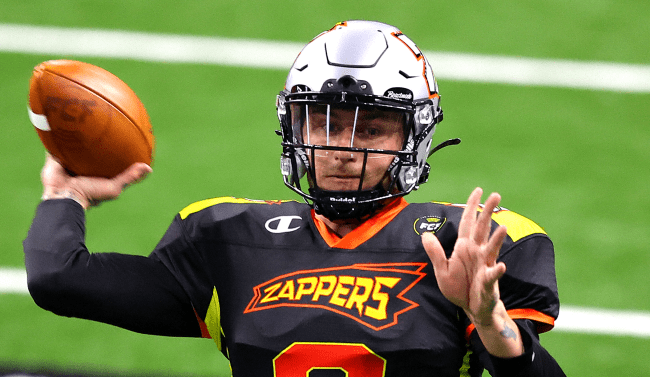 For some reason, Johnny Manziel, who hasn’t played in the NFL since 2015, is on some sort of whirlwind mea culpa jag ever since he started up a new podcast with with Mike Stud called Ball Don’t Lie.

Maziel already admitted on the very first episode that no one, not the President, not LeBron James, not Tom Brady, no one could have saved him from being so self-destructive during his brief run with the Cleveland Browns.

Now, in the latest episode of Ball Don’t Lie, the 28-year-old aspiring professional golfer says his June 29, 2012 arrest for disorderly conduct and having a fake ID while at Texas A&M may have actually helped him with the Heisman Trophy that year – the first freshman to ever win the award.

Related: Kliff Kingsbury Used An Incredible Strategy To Get A Hungover Johnny Manziel To Practice In College

“At the end of the year, I rushed for 1,500 yards. I outrushed Todd Gurley in the SEC. Nuts. My redshirt freshman year, the year I won the Heisman,” he continued.

“I believe all that was directly correlated to me running those sprints at the beginning of the year and being in the dumbest shape on the team.”

So, getting arrested was a good thing for Johnny Football?

“Without a doubt. I got punished and I won a Heisman for it. It’s crazy. The bad doesn’t always turn out so bad down the line.”

There’s a proper little life lesson to share with the kiddos.

"That's something I'll probably never get over."@JManziel2 still has regrets from his time at A&M.

“I think every day if I would of done what I need to do in between seasons, not only would I of won another Heisman, I would have put my team in a position to win a national championship,” Manziel admitted.

“I wasn’t voted team captain after winning the Heisman because I didn’t show up to workouts, I didn’t do what I need to do and I wasn’t accountable to guys on my team.”

On Saturday, he was reminded once again on Twitter what a disappointment he was, and agreed with the person who sent the since deleted tweet.

Nobody thinks I sucked in the league more than me. Get over it broseph https://t.co/ej8AtrO3oH

I agree with you bro. Life goes on either way

I’m happy af..why y’all so mad and negative? Life is a beautiful thing, live yours!