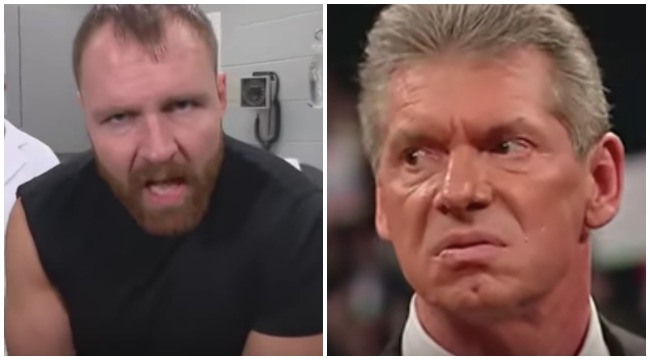 Jon Moxley’s interview with Chris Jericho on his Talk Is Jericho podcast about his utter hatred for the creative direction of the WWE has raised questions about Vince McMahon’s grasp on the current state of wrestling.

Moxley, who fought as Dean Ambrose in his eight years with the WWE and left the promotion a month back before making a surprise debut at AEW’s Double or Nothing this past weekend, didn’t waste time in burning a bridge with the billionaire executive.

It got to the point where Moxley suffered from anxiety and depression from having to state his case with the creative team each Monday before Raw.

“I remembered physically leaning on a road case, and just feeling like actual exhaustion … emotional, physical, mental exhaustion. Not so much because of that day but because of six years of this,” Moxley said.

On the very same night Roman Reigns announced he was receiving treatment for leukemia last year, Ambrose, who had already gone full heel on Seth Rollins, was scripted to make savage comments mocking the diagnosis.

He recalls that McMahon told him: “But Roman’s part of the story, we’ve got to make sure he’s still included. You turn on him and Seth.”

Moxley said: “He says it in a kind of innocuous way where it kind of didn’t seem so bad. Basically, he gave me the Vince Jedi mind trick.”

But when Moxley delivered the promo in the ring, he knew it was a mistake.

“As soon as that line left my mouth, I thought, ‘Oh my God, I can’t believe I just said that,’” Moxley said. [via NY Post]

Moxley went on to describe another cancer dig that was so over-the-top, he refused to repeat it on Jericho’s podcast.

“I don’t know who wrote it. I don’t know if it was Vince himself,” Moxley said. “If it was a writer and you’re listening right now, you should be ashamed of yourself. If I’d said it, it would have been on me, not Vince.”

A bizarre strategic move for the WWE considering its partnership with the Susan G. Komen cancer-research foundation.

For what it’s worth: I’ve talked to several people connected to WWE regarding the Moxley / Jericho podcast. They all agree w/ Mox. He’s not saying anything others aren’t thinking. One quote I got was “It’s all true, it’s a mess. And it’s not changing anytime soon. Vince is Vince”