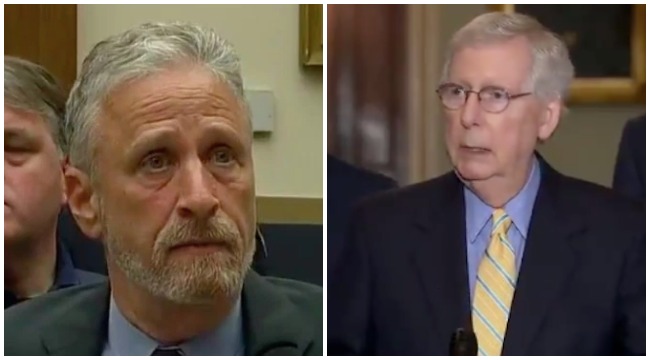 It took just 24 hours after Jon Stewart gave the House Judiciary Committee a collective noogie last week over the lack of prioritization of the 9/11 Victim Compensation Fund for the Committee to unanimously approve the bill calling for full compensation for first responders and survivors still suffering from conditions related to the 9/11 attacks. The bill, which still needs to be approved by the full House and the Senate, will extend funding for 70 years.

Stewart’s impassioned rant garnered tens of millions of views online and as a result dressed down Senate Majority Leader Mitch McConnell for dragging his feet on the issue and “passing the political football,” as Stewart described it.

On Sunday, the comedian expressed concerns that the bill wouldn’t pass in Senate thanks to a particular Kentucky Republican holding it as a bargaining chip to get other bills passed.

“In terms of getting the 9/11 bills passed, Mitch McConnell has been the white whale of this since 2010,” Stewart said.

On Monday, McConnell defended his handling of the issue by coming off smug as can be.

“Many things in Congress have [come] at the last minute. We have never failed to address this issue, and we will address it again,” McConnell said during an interview on Fox News. “I don’t know why he is all bent out of shape. But we will take care of the 9/11 victims’ compensation fund.”

Last week, McConnell said Congress that he had not “looked at it lately,” Congress has dealt with the 9/11 victims compensation fund “compassionately in the past” and plans to do so again upon its expiration in 2020.

“I want to make it clear,” Stewart said. “This has never been dealt with compassionately by Senator McConnell. He has always held out until very last minute, and only then under intense lobbying and public shaming has he even deigned to move on it. … In 2010, he used it to make sure the Bush tax cuts would be permanent. In 2015, he took it out of the transportation bill because he wanted to extract some promises on oil imports. This bill right now, in 2019 — he’s been aware of this. We were told in August that this fund was running out of money and that people were going to have their awards slashed by … up to 70 percent.”

I’ll tell you why. Because 9/11 victims are getting sicker, and the last time this bill came up you delayed.@SenateMajLdr McConnell: Ease everyone’s worthy concerns right now by committing to put the bill on the floor for a stand-alone vote as soon as the House passes it. https://t.co/elKaMcNJK4

From the top rope comes….Jim Carrey?

Kudos Jon Stewart for supporting the heroes of 9/11 who gave all to fulfill their duty while Congress, as usual, ran to hide from theirs like cockroaches when you turn the lights on. And speaking of insects where is ‘America’s Mayor’? Shouldn’t Rudy be fighting for these people? pic.twitter.com/3UN4daIain