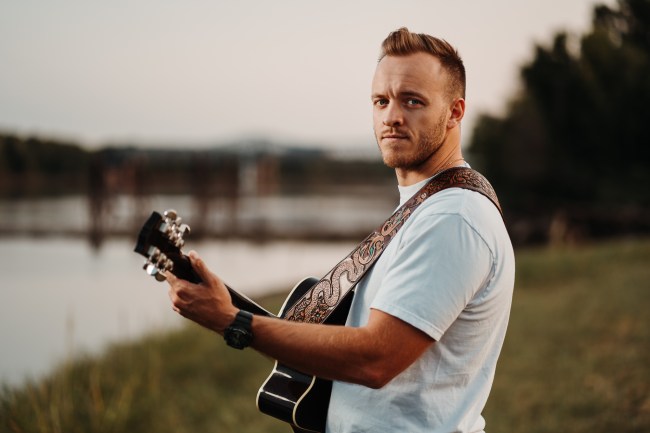 The current strategy for musicians in releasing music is to drop a series of singles in a compressed period of time, albums be damned. And in 2020 — the Year of the Shitpile — St. Louis-based solo artist and all-around hunky dreamboat Jordan Suter was no exception.

In 2020 he released “Fix You,” “Your Town,” “Pablo,” as well as the four-song EP Tumbleweed. Most recently, he gifted fans with his latest single — an excellent track called “Sledgehammer” — which fortunately has no relation to the shitty yet somehow popular Peter Gabriel song of the same name.

Suter’s 2020 body of work was recorded acoustically and stripped down in October at Gaslight Studio in St Louis and “Sledgehammer” was actually inspired by a party trick performed by his grandfather who he watched grow old and lose his vigor.

“While holding the handle end, he would lower the steel head until the sledgehammer was parallel with the ground,” said Suter. “Without bending his elbow, he’d move the head of the sledgehammer in a semicircle until it touched the tip of his nose, and then lower it to the ground.”

But then, as we all experience, he watched the light fade from his grandfather’s spirit over time.

“A story about someone who used to move a sledgehammer around like it was a kid’s toy, who now hurts and grumbles just getting up out of a chair,” he noted. “At least we’ll always have the stories about the good old days to remind us that we all at least used to be as hard as steel.”

Beyond releasing a well-received trove of new music, while 2020 has been a crap year for most, it’s been a promising one for Suter as American Songwriter took note of his rise.

“His music is more engines and grease than cowboy hats and spurs,” writer Madeline Crone astutely suggested. “Singles he shared throughout the year “Pablo” and “Your Town,” illustrate this soundscape — delivering the authenticity of his artistry.”

Originally from eastern Colorado — an endlessly flat, somewhat barren landscape that bears no resemblance to the mountainous terrain of the state’s central and western regions — Suter earned a degree in biology and then moved to St. Louis, where he works as a forensic scientist by day to pay the bills.

It’s clear Suter has an endless trove of talent, the rugged good looks that record companies look for, along with a strong supporting cast. But with the music space being as broad as his native eastern Colorado plains — only time will tell if Suter can get the breaks required to break out and become St. Louis’ next big music export. Only time will tell, but 2020 certainly gave him a strong foundation.