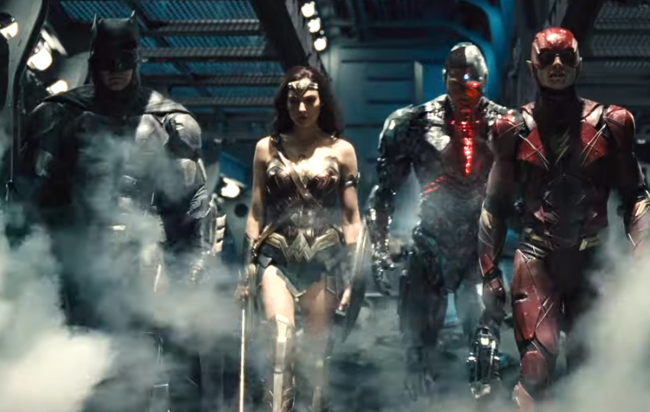 On Valentine’s Day, we were finally treated to the first trailer of the long-awaited Snyder Cut of Justice League (because there’s nothing more romantic than spending the night trying to convince your significant other that the inclusion of Darkseid in this new version is a big effin’ deal.)

When you consider the director’s version of Justice League spent years being viewed as an urban legend, it’s wild to think we’re less than a month away from its release. If you’re not familiar with the backstory, a family issue led to Snyder pulling out of the project and Joss Whedon was tapped to finish the job, which didn’t exactly pan out very well.

The theatrical version of Justice League was the cinematic equivalent of someone setting out to cook a dish with one set of ingredients only to have another chef—armed with their own food and unique cooking style (neither of which made sense for that particular dish)—step in to serve up something that was not only inedible but forced you to suppress the urge to vomit.

Shortly after the movie was released, rumors began to swirl that Snyder was sitting on his own cut, which was supposedly vastly superior to the one that was unleashed upon a disappointed viewing audience which isn’t really saying much.) After the #ReleaseTheSnyderCut movement gained traction online, some of the film’s actors endorsed the push, and when everything was said and done, Warner Bros. gave Snyder $70 million to give the people what they wanted.

It was a wonderful day for Snyder and, therefore, the Justice League fans who celebrated the announcement. However, ever since then, I found myself pondering the same question again and again: Should we actually be excited?

Despite the amount of hate the original version of Justice League received, it was a smoldering piece of kindling compared to the dumpster fire that was the Snyder-helmed Batman v Superman: Dawn of Justice. When I saw it, there was only one other person in the theater, who made their way out around 40 minutes in—which was a real shame, because they missed out on “The Martha Moment,” which is one of the most unintentionally hilarious scenes in movie history.

I wish I could pretend Batman v Superman never happened, but sadly, there are some things you can’t unsee.

Justice League was also a colossal mess, but that could be forgiven when you consider the haphazard way it was put together. Switching directors and then trying to change the vibe of the movie halfway through was destined to fail. For better or worse, Snyder had created a mood for the DC movies, one that stood in stark contrast to the route Marvel went down. As a result, bringing in the man who directed the first Avengers movie and played a major role in creating that warm and cozy MCU vibe was something of an affront to everything Snyder had sought to create.

Whedon sought to erase most of that, and in its place, bring in some of those charming Marvel qualities to Justice League. The DC films had been Snyder’s project to run with, and as he saw so much of what he had built be stripped away, it did seem like he deserved the chance to finish the job he set out to do.

However, it’s amazing that the sheer awfulness of Batman v Superman has been largely dismissed by the folks championing the Snyder Cut. On a human level, letting him revisit his creation seems like the right thing to do, but on a professional level, I can’t understand why anyone thinks he earned the right to do so.

In reality, none of Snyder’s DC movies have been all that good. I know that at least one of my friends here at BroBible stands by Man of Steel, but I thought that movie was junk, and when you throw Batman v Superman into the mix, I don’t see how you’re magically creating a recipe for success when it comes to Justice League. Sure, it might be different, but “good” feels like a long shot, and it feels like people got so caught up in the idea of the Snyder vision that they failed to consider the actual product may never come close to meeting their vision of what it should be.

There’s no shortage of people to blame for the underwhelming nature of Justice League, but I’d argue it was systematically destined to fail. The folks at DC wanted to do what those bastards over at Marvel had done, but they didn’t want to do all the work involved to achieve that goal. The MCU was methodical and strategic. They put in the time to lay a solid foundation so that when we got to Infinity War, it meant something. We had a history with all the characters and understood the stakes. They played the long game and it paid off.

DC, on the other hand, tried to skip straight to the back nine, and it showed. Everything was rushed. There wasn’t any story or character development in Batman v Superman or Justice League; shit, Cyborg just kind of showed up and that was that. If Marvel had been running the show, he probably would’ve gotten his own film or at least a key role in the standalone Batman movie that should’ve been made before his showdown with Superman. Even if your heroes are engrained in pop culture, you still need to establish who they are as opposed to relying on their reputation, which DC failed to do.

Now, there’s probably a reason I’m writing this article as opposed to calling the shots at a Hollywood studio, but if DC had wanted to do things the right way, it seems like it could’ve followed a pretty simple path.

First, you make a Superman movie to establish the Snyder-driven DC worldview. Then, you follow it up with a Batman movie with Affleck because you’re essentially introducing a new version of Batman; a “grizzled and beaten down by years of doing the Batman thing” interpretation where you can explain things, like, say, why he lives in a glass box next to a pond instead of Wayne Manor. This is important because Christian Bale’s Batman is still fresh in our minds, and without giving him a dedicated vehicle, you’re not giving viewers enough time to adjust their expectations.

Once those are out of the way, you make another Superman that takes place after the events of Man of Steel and before his showdown with the Caped Crusader. When you consider 18 months of action elapsed between those two movies, you can’t just recap what happened or allude to key developments; you have to show it. Once that’s done, you complement it with another where Batman grapples with the destruction and carnage stemming from Man of Steel that seemed to leave him very shook, and then finally bring both of them into the fold in the same project (which would also give you more time to introduce Wonder Woman and provide her with a proper lead-in to her own standalone film.)

At some point, you introduce Flash & Cyborg (both could be part of one of the Batman movies.) They could even get their own vehicle, but there’s not much of a rush on that front. As for Aquaman, I’m fine with waiting to bring him into the mix until Justice League, but that’s really the least pressing issue here.

Over the course of all of these movies, you could slowly but surely introduce the Big Bad while teasing the massive amount of shit poised to hit the fan in Justice League. Yes, it takes some time and patience, but I think it’s safe to say that approach worked out pretty well for Marvel.

Conventional wisdom would suggest that some of these structural issues will be remedied by the Snyder Cut, but I’m kind of confused by that suggestion. What was Snyder’s initial vision of Justice League? Did he originally set out to make a four-hour movie? Was it supposed to be split into two parts? Snyder is adding what amounts to an entirely new movie to an existing movie, so how the hell did we get here in the first place?

Also, a four-hour movie? I know that we’re all still stuck at home and are always looking for a way to kill some time, but c’mon. I feel like that’s really pushing it when it comes to asking us to sit through something, especially something that we’ve mostly seen before. When the Snyder Cut was announced, the initial buzz was that it would be cut up into a four-part miniseries. That sounded enticing; like something that we could all get behind—at least until it became a movie again.

I know The Irishman came close to matching that runtime, but just because you can do something doesn’t necessarily mean you should (you could also argue Scorsese should’ve gone the miniseries route, but there was no chance that was ever going to happen.)

Watching anything for four hours is one hell of an ask, but it’s a borderline imposition when the movie in question is directed by Zack Snyder. His movies are so dark! I’m not talking figuratively here; there are still parts of Batman v Superman where I have no idea what was happening solely because of how dark it was. It made the Battle of Winterfell look like a Wes Anderson movie! Now you’re asking me to deal with that for four hours? That’s a bit much, Zack.

Am I going to watch Justice League as soon as it comes out? You bet your ass. Why? I don’t know. Because I’m forever loyal to Batman? I’m a glutton for punishment? There’s a chance I’ll actually be proven wrong? It’s hard to say.

However, I will say this: Snyder and the DC folks biffed this entire thing. It’s not entirely Snyder’s fault, but if his cut of Justice League fails to live up to the hype, maybe the people who fought for the chance to be subjected to it in the first place are really the ones we should blame.